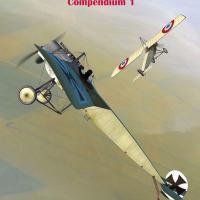 Many decades ago when I became initially fascinated with early aviation and the adventure of WWI fliers in particular, the aircraft that symbolized that era and fascination was, and still is for me, the Fokker Eindecker. Like most modelers interested in WWI aviation, I considered the Eindecker a favorite kit. Unfortunately, until Eduard began producing quality plastic injection kits, a good, accurate, and relatively easy to build Eindecker was hard to find – and one in the larger scales, almost impossible. Accurate information was equally difficult to come by. Most information in depth was to be found on a few enthusiast WWI aviation sites, and even then, contention was rife and misinformation common. This led to the occasional and mainly entertaining flame wars which would flare up, burn brightly for a time, then die down only to lie smoldering until the next ‘expert’ pronouncement was made.

My personal opinion is that this situation might well have continued if not for Wingnut Wings beginning to produce large scale, accurate, and modeler-friendly kits of WWI aircraft. Interest in these early aircraft took off and, as a consequence, intentional or not (I do not know Josef Scott nor his intentions for writing the amazing books under review here today, but I suspect Wingnut Wings had some impact on the authorship or production of these volumes), we have now what I consider the benchmark in Fokker Eindecker research and publications.

This usually comes at the end of a review, but I want to say now that if you have any interest at all in the Eindeckers, or in the genesis of purpose-built fighter aircraft or early WWI aviation in general, you owe it to yourself to get these two volumes. Not only are they outstanding reference works for the modeler, but they are fun to read and the organization and captioning of the photographs are informative, entertaining, and make the works even more useful. After spending many hours just looking through these volumes, I am wondering if there are any other useful Fokker Eindecker photographs out there to be found. Josef many have rounded up all there are. Or, hopefully, seeing these, someone out there with a few unseen photos that great-uncle Elmore stuffed into a trunk in the attic will turn up. Until then, these must be the definitive collection. Many thanks, Mr. Scott!

That’s the overview, but the contents are amazingly interesting and well presented. Each photograph is clearly numbered and those numbers keyed to detailed captions usually presented on the same page. There are occasional overlaps in which there is sufficient information in captions to justify spilling them on another page, but this is rare and really not intrusive. The history of the Eindecker is also well chronicled through the two volumes, amplified by the amount of information Mr. Scott has included in the captions.

For many of us, myself included, the paucity of our actual Eindecker knowledge is quickly made apparent. I did not know, for example, that the early models were two-passenger observation aircraft, with observation windows cut below the high mounted wing and the observer sitting on a board behind the pilot. I didn’t know that on later models there were observation panels that the pilot could slide up and down on the cockpit sides, as well as two he could flip open in the floorboard. (The Wingnut Wings models incorporate these latter features in their kits.)

I didn’t know that the landing gear had articulation mechanisms built into the design and the bungee shock absorbing cords were wound inside the cockpit. Or that the wing and pylon rigging turnbuckles were color-coded. I also didn’t know that Max Immelmann shot off the ends of his propellor while flying an Eindecker E.IV on 31 May 1916 but was able to land in a field near Courtai, France, without injury. As many know, on June 18th, while flying an Eindecker E.III 246/16, Immelmann’s synchronization gear failed again and he shot off at least one blade from his propeller. Some theories are that he was actually shot down by a British pilot, or that his engine was somehow damaged by enemy fire – aircraft or anti-aircraft fire – and this caused his death. Although this information is not in the Compendium volumes, to conclude the story, what seems most likely, given eyewitness accounts and the analysis of the wreckage, is that the synchronization gear did fail, the prop was shot up which unbalanced the rotary engine, and the resultant violent shaking fractured some fuselage members behind the cockpit, separating the tail section from the rest of the airplane and resulting in a fall from 6000 meters to his death. The tail section landed separately and relatively intact, while the rest smashed into the earth along with Immelmann, and burned.

And, lastly for this review, I didn’t know that Fokker Eindeckers did not leave the Fokker factory in clear doped linen “color”. From the evidence available, discounting British reports that the Eindeckers were “beige” or “straw” color (whatever that meant), all Eindeckers were painted in a color that was similar to a gray-green (perhaps very similar to RLM02) or a light olive green. Exceptions would have been a few Bavarian or Naval Eindeckers, but these were few. Like most everyone else, I had faithfully painted my Eindecker models in some version of CDL (clear doped linen). No longer.

The color plates are well done by Ronnie Barr and provide, along with the other variants, the only accurate representations of the early models that I know of. These color illustrations will be very useful in building any of the models’ markings not supplied by the kit makers, and are small works of art in their own right.

Each volume contains a selected bibliography for further reading, and production appendices for all of the variants.

The Fokker Eindecker Compendium volumes are, in my opinion, landmarks in the documentation and history of these famous aircraft. I am certainly glad to have mine and am very happy that I was given the chance to read and review them. Go get yours while they are still available and build and Eindecker or three…

My sincere thanks to Albatros Productions, Ltd., for providing these review samples, and to IPMS/USA for allowing me to review them.