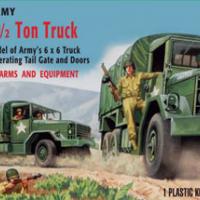 Revell / Monogram has re-released their vintage “Eager Beaver” M-34 6x6 2.5 ton truck, the first of a long-lived family of trucks initially deployed by the United States Army, and subsequently utilized by many nations around the world. The M-34 started out in 1949 as a design by the REO Motor Car Company as a 2 1/2 ton, three-axle, all-wheel drive, off-road truck that was later nicknamed the "Deuce and a Half". The first vehicle in the family, the M-34, was quickly superseded in military usage by the M-35, the major difference being the M-35's 10-tire configuration versus the M-34's 6-tire configuration.

This old kit brings back memories of bicycle trips down to Rexall Drugs with my paper route money to buy yet another plastic model – I probably had a dozen of these trucks in and around the sandbox and dirt piles in my back yard, filled with mud-covered and dog-chewed army men. When I saw the opportunity to review this kit, I knew I had to get it!

The first thing you notice opening the box is the simplicity of its contents – all of 73 pieces shaking around like a bunch of loose bones in a barrel. The pencil-thick sprues have massive attachment points, and the hard, dark-green plastic is slick with mold-release agent and dotted with pour-stubs and flash. Still, I have to admit, what might be unacceptable in another kit from another manufacturer is a pleasant walk down memory lane with this kit. It appears that this kit is the exact same kit as released in the 70’s with an updated set of decals and perhaps new tires.

The contents of this box include:

The instructions begin with cutting and attaching clear plastic sheet for the windshield in the cab and rear deck look-though. I bypassed this step since doing this now would complicate painting and finishing later on. In the end, I left the windows open with no windshield – I felt the finished truck looked fine without them, since attaching the super-thin sheeting from behind looked odd against the over-scale thickness of the plastic window frames.

The parts that make up the undercarriage are well thought out and designed for easy assembly. You can leave the wheels and tires off until the end of the build to assist in painting, which is what I did.

The rudimentary cab comes together well and could use a lot of detail since the interior is clearly visible from the outside. That said, the entire truck could use a lot of added detail, so perhaps leaving the cab as sparse as it is fits with this build.

The seven black rubber tires included in the kit are well detailed but contain a significant bead of rubber along the center of each tread that is difficult to remove. The fit on the plastic wheels is tight and true, and they look right. The rubber tires took lacquer primer, an acrylic-lacquer base coat, enamel camouflage paint, and several applications of pigment dampened with paint thinner without any problems whatsoever. These must be new in the re-release.

There are six rudimentary figures included with the kit. The driver doesn’t exactly fit on the front seat behind the steering wheel and will need some rearrangement in order for that to happen. The only other soldier that is made to go with the truck will also require some surgery to stand correctly with one foot on the doorstep. The other four figures are in action poses, including a bazooka team and a radio man. Detail is severely lacking, and there are thick, solid hunks of plastic in areas that should be hollowed out (inside of elbows, etc.). Still – the figures give the kit a certain “coolness” factor for nine-year olds (and 56 year-olds who think they’re still nine years old).

The decals are surprisingly thin and well-registered, leading me to believe that they have been reworked for this re-release. The only issue I had was that I thought the big star on the front hood was waaaaaaay too big – it just didn’t look right. I had plenty of spare white stars in my decal stash but I felt the truck looked better without a star on the hood altogether, so that is what I did.

The Deuce and a Half can be painted just about any color as long as it is green, so I chose green. The only items I left off the completed model for painting were the wheels and the cab roof, attaching these before weathering. Painting and finishing followed these steps:

(Note: I thin Model Master Paints using their own airbrush thinner. I thin all filters, washes, and wet pigments using odorless Mona Lisa Paint Thinner. I use a Pasche-H Single-Action airbrush, Number #3 tip, at 20 lbs. pressure for everything.)

What can I say? This kit isn’t for the purist. There are so many flaws and so much missing detail that to compare it to other Deuce and a Half kits on the market would be a fool’s errand. Instead, this kit should be built with the mindset of lost youth; a nine-year olds’ big dreams and empty pockets.

This would be the kit to use for filling out a big convoy diorama, even if the model itself is of Korean War vintage. After cleaning all the pieces, I assembled the whole truck in just under two hours, and it only took that long because I had to wait for the glue to set up at least a little. This model was made for beginners – but it also delivers for experienced modelers as well, providing a welcome diversion from all the super–serious builds we normally busy ourselves with.

I recommend this kit for all modelers, young and old. There are no fit problems and assembly is a breeze.

I would like to thank Revell / Monogram for providing this kit for review, and IPMS USA for giving me the opportunity to build it.

Right side uncovered
Previous Next