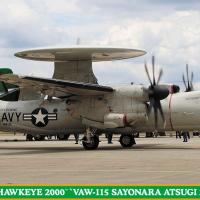 The marking options are of the same plane, just a few changes in terms of paint over a period of time.

The E-2C Hawkeye 2000 is the fifth generation production E-2C Hawkeye and incorporates significant enhancements in data management, system throughput, operator interfaces, connectivity, and situational awareness to support the Navy's evolving Theater Air and Missile Defense mission. With its massive rotodome, it can see for hundreds of miles and is truly the “eye in the sky.”

When I first opened the box, I was greeted with an authentic stitched squadron patch of VAW-115. It is very cool that Hasegawa is generous enough to add a patch to the kit. Under the patch healthy amount of plastic. 11 sprues to be exact and two sets of poly caps. Every part looked crisp and finely molded with recessed panel lines all in light grey plastic. The instruction manual is very easy to read and has pages for all of the steps (17).

The first step includes the cockpit assembly. Everything fits where it is supposed to and the instrument panel has molded detail, something I don’t find on many 1/72 kits! Step two continues with the cockpit assembly. A total of nine holes are to be drilled in the fuselage halves to accommodate antennae and fins in later steps. 30 grams of weight is to be glued into the nose. I couldn’t find enough room to fit it all in so I moved the weight to just behind the cockpit set up.

The kit moves briskly along after the gluing of the fuselage halves which fit remarkably well, the main wing and tailplane assemblies. Then all of these sub-assemblies are glued to the fuselage. Now it’s starting to look like an airplane! At step seven, the instructions call for the windshield installation. I masked the clear piece and glued it on with Elmer’s Glue. This is because if I ever needed to remove the windshield it will easily pop off with a tug. I use this technique a lot on WW2 aircraft with sliding canopies.

Step eight is assembling the engine nacelles. Don’t forget the poly caps for the propellers! Steps 10 and 11 focus on landing gear assemblies and installation of gear doors.

So far, this has been one of the most enjoyable Hasegawa kits I have ever built. Everything fits well with no problems at all. The last page of the build instructions includes some small, but very important steps. The kit offers you a choice of installing the flaps up, or down. I chose the later. The rotodome construction is very simple with a poly cap sandwiched between the top and bottom halves.

The last steps involves adding all the little fins, bits and pieces as well as the assembly of the eight-bladed props. The props push easily into the poly caps of the engines and can spin when moved. Finally, the rotodome is shown to be glued on. I left it off for the painting process.

As I stated before, the build process was immaculate. I highly recommend this kit as the build quality is top notch!

After priming the entire model in Vallejo Flat Black Primer, I sprayed a nice coat of Tamiya XF-80, Royal Light Grey. I won’t be doing too much post shading because after reviewing pictures, the Navy seems to keep their “Eyes in the Sky” pretty clean.

Once the grey was dry, it was time to start the small painting details that can make or break the model. On the E2C, when the flaps extend, a portion of red appears to show that they are down to an extent. When they retract, there is no red showing. Since I lowered the flaps to a takeoff position, some of that red can be seen.

Many minutes later, and a ton of blue tape, finally the red bars were finished and look great! (See pictures)

Now for the next set of mask, paint, and repeat. There are 10 de-ice strips on all of the E2C’s leading edges. These are painted flat black after additional masking so as to get a clean edge.

After the last details are painted, such as the wheel wells and gear doors, glare strip, and some more red, the airplane is ready for a gloss coat of Future. Spraying the entire model makes a hard smooth surface for decals, decals and more decals. After letting the Future cure overnight, the decals were added. They are very clean with little to no clear edges. The colors are vibrant and authentic and the film is top quality! Some of the decals were very tricky to place. The thin red “do not cross” strip was tough because it could tear easily. Luckily with lots of water, I ended up getting it correct. The large decal on the tail was slightly large for the surface. Some excess had to be trimmed off.

My overall takeaway from decals on this model is there is a lot of Micro Sol used. There are so many little panel lines and bumps that the decal has to fit into, the Micro Sol did a good job.

After all the decals were finally in place, another gloss coat was sprayed over the model to protect them from any weathering products or methods that could harm them.

I started with a dark grey wash on the whole model. A darker grey, almost black wash was applied to the engine area to simulate a bit more grease and grime that the props could spin up.

After examining many pictures, I added some grease stains around bolts and rivets on the engines.

Light streaking was done in the middle of the wing after seeing a lot of this in real pictures. Also, the exhaust from the turboprops engulfed parts of the tail as it was flying so that is pretty prominent and dirty on those horizontal and tail parts.

Overall, this was a great kit. All the parts fit very well and the result is sure an interesting subject! Although the decals are numerous, with patience they can be applied successfully. I can say that beginners through expert builders should enjoy building this airplane.

This E-2C release is sure a nice addition to Hasegawa’s growing collection and I am sure it will catch eyes when displayed.

Thank you to Hasegawa USA for providing this kit, and thank you to IPMS USA for giving me the opportunity to build it!