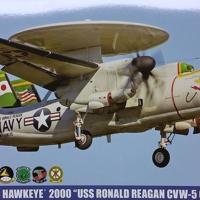 The Grumman E-2 Hawkeye has been in service with the United States Navy since the 1960s, as well as serving in other nations’ militaries, including Japan, Taiwan, Mexico, Egypt, and France. The distinct look of the Hawkeye, with its high-wing, twin turboprop engines, multiple vertical stabilizers, and most noticeably, 24-foot rotating radar dome, make it readily recognizable. The ‘C’ version of the E-2 was first operational in 1973, and further improvements to the version continued into the 21st century, most noticeably to the eight-blade propellers, which were incorporated to improve the harmonics with the critical electronics of the aircraft.

Hasegawa’s 1/72 E-2C was first released in 1998, and has seen several subsequent re-releases, with different decals and versions since then. The version under review represents VAW-115 ‘Liberty Bells’ on the USS Ronald Reagan. This is a sharp looking aircraft with a nice mix of greens and yellows to offset the light gray of the basic airframe. The kit itself comes in the standard Hasegawa top-opening box, with a nice color photo of the subject aircraft on the cover. There are 174 parts, spread over five gray and one clear styrene sprues. Instructions are standard Hasegawa fare, with a separate sheet for the markings of this re-box version. Color callouts, as per usual for Hasegawa, are for Gunze Aqueous Color (water-based) and Gunze Mr. Color (lacquer-based). In nice touch for this kit is the inclusion of a VAW-115 patch in the colors of this model.

Assembly begins with the cockpit, which is basic but detailed enough for the scale and considering the limited view once installed in the fuselage and covered by the windscreen. A nice touch is the instrument panel decal. There are no seat belts. The front wheel well mounts under the cockpit floor. The instructions call for thirty grams of weight to be added to the nose, which I did, and which still wasn’t enough. There is very little room in the nose for weight, but I should have added more behind the cockpit bulkhead to avoid a tail-sitter. The fuselage halves go together cleanly, but the insert (needed to support so many versions of the same basic kit) that goes in the bottom of the fuselage is too narrow. There is a lot of detail in the area, so sanding and filling the large ledge caused by the miss-fit is a problem. A solution (which I did not try) may be to trim the insert so that it could be spread wider. Regardless, the fit of the insert is a large issue with this kit. Other than the insert, the rest of the fuselage needed very little filler. The air inlet of the top of the fuselage fits poorly and required quite a lot of sanding and filling.

The wings also go together nicely, and the option to pose the landing flaps in open or closed position is a nice touch. The red inner flap color offers a nice contrast to the gray wing color. The fit of the flaps is so nice that no cement was needed to keep them firmly in place. Very little filler was needed on the wing halves, but the engine nacelles required a bit of sanding a filling. The wing to fuselage join is clean, with just a little work along the trailing edge needed to make a clean join. The tail assembly also goes together nicely, and mounts cleanly and easily to the fuselage. The big rotating dish is comprised of two halves and mounting hardware, which went together with little need beyond some minor sanding and filling.

The landing gear on this kit are little gems. They are nicely detailed and fit easily and snugly into place into well-detailed wheel wells. The wheels are separate from the tires, making painting a breeze. I nice touch is that the tires are pre-flattened and bulged to represent the aircraft wright on them. The landing gear doors on this aircraft are edged in red, which was easily replicated with a red fine-tip Sharpie. The eight-blade props are nicely represented, although I painted the leading edges instead of using the kit decals.

One part that caused me problems was masking the roof windows on the cockpit. I would definitely recommend investing in a pre-cut mask. These would save a lot of time and frustration.

I used Gunze’s Mr. Color paints throughout; these are the colors recommended by Hasegawa. Matching a decal color to a painted color is often a problem, and I was expecting to have an issue matching the green paint called put in the instructions with the green in the decals that abut the painted parts around the cockpit windows. Fortunately, Mr. Color C064 is a perfect match for the green in the decal sheet. Other than the green details around the cockpit and vertical stabilizers, and red for inner flap detail, the airframe was painted in the recommended gloss light gray. Once everything was dry, it was onto the decals.

Speaking of decals, the ones in the kit had major problems. I had several break apart while still in the water. In addition, the decal walkways on the top of the horizontal stabilizer were too big and did not fit between the vertical stabilizers. Considering that the decals are what sets this kit off from the other dozen versions of this kit, this is unfortunate.

Overall, the plastic fist very well, and builds to a striking aircraft model. There are fit issues along the underside of the fuselage, and more weight in the nose is needed than is recommended in the instructions. Decals have fit issues.

Bonus patch with kit
Previous Next