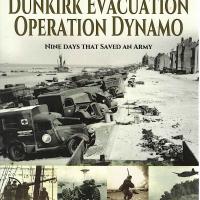 Dunkirk Evacuation Operation Dynamo is an excellent book that paints a vivid picture of the chaos and monumental evacuation efforts to save the British Army early in WWII. The book describes one of the most inspiring stories of World War II, the evacuation from Dunkirk, on a daily basis from Sunday, May 26, 1940 through Monday, June 3, 1940. Evacuation of Britain’s only army, the British Expeditionary Force, from Dunkirk was chaotic and rushed but miraculously saved the BEF.

Part of Pen & Swords Illustrated Series, the book is a compilation of fascinating photos. The book is organized in chapters for each of the nine days of the evacuation. Each chapter provides some text describing the major operations of the day and includes many black-and-white photographs of the rescue operations. The photographs are high-quality, quite clear, and helpful descriptions are provided in the photo captions.

Dunkirk finally fell to the Germans on 4 June 1940 as the first troops entered the town between 7:00 and 8:00 AM. 40,000 British and French troops still remained, however over 338,000 troops had been evacuated since 27 May. This chapter includes many photographs taken by Germans after the evacuation showing the massive amount of equipment left behind by the British army.

The excellent text and photos in this book resent a vivid image of the desperate, chaotic evacuation from Dunkirk and the heroic efforts necessary to save the BEF. The photographs are high quality and the captions provide good descriptions of the troops and ships involved. This is a very interesting read and the photographs or a fascinating look at the Dunkirk evacuation. Modelers will find many inspirations for dioramas in the book’s photographs. History buffs will enjoy the written descriptions and visual imagery of Operation Dynamo.

Thanks to Pen & Sword Books for this wonderful publication, and to Casemate for providing the review sample to IPMS