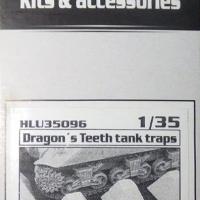 Hauler produces photo-etched and resin upgrade sets for armored fighting vehicles (AFVs), airplanes, cars, railway vehicles, and dioramas. They also produce a few resin kits. Their products are in most of the common scale sizes, 1/72, 1/48, and 1/35, but they also produce a number of other items in common railroad hobbyist scales.

The kit for this review is a set of sharply cast resin Dragon’s Teeth. Dragon’s Teeth are those square concrete pyramids, most often associated with the Siegfried Line in Germany during World War II. However, these types of fortifications were used in many countries, other than Germany in World War II, and continued to be used today around the world. The idea behind these formations was to create an obstacle to slow the advance of enemy AFVs, or to channel those vehicles into prepared kill zones where anti-tank units waited in ambush.

This kit includes 8 resin Dragon’s Teeth. The moldings are very crisp and the ones provided for this review had zero flash to remove. The pour stubs are located on the bottom of the pieces, and could probably be left in place when using them for a diorama. However, removing the stud would be a simple process of just filing, or cutting it off.

The parts come in different conditions of wear, which is a really nice detail to keep things from being too uniform. The Dragon’s Teeth provided in this kit had varying levels of wear, going from almost no wear to some that showed excessive wear. This small, but excellent feature can really add to the realism of the diorama and not create a ‘cookie cutter’ look with each piece being exactly the same. Actual Dragon’s Teeth come in various sizes, usually about 3-4 feet. The ones in this kit are all the same height and size, and better represent the shorter variety.

Since there was no flash, preparing these for display was extremely simple. I primed them with some grey automotive primer, then added a dark acrylic wash, and then dry-brushed some Dark Sea Grey over the piece. In just a matter of minutes, other than waiting for paints/washes to dry, you have some very nice pieces to add to your diorama.

If you’re planning an armor diorama, I highly recommend these pieces. In addition to diorama additions, these pieces would work well with a variety of table-top wargames as barriers, or objective markers.