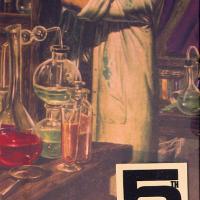 Thank you to the crew at Moebius Models – Frank Winspur, Dave Metzner and Bob Plant – for providing this review kit! The opportunity also wouldn’t be possible without the IPMS Review Corps staff, who graciously allowed me to give this one a try.

As a rule, when I build a model for a review, I focus on the model itself rather than the subject’s background. However, in this case, many may not realize the source of the kit idea. The idea came from a book, a novella that was authored by Robert Louis Stevenson and first published in 1886. I had no idea that this Scottish author of Treasure Island also penned the inspiration for this kit. While a completely fictional story, The Strange Case of Dr. Jekyll and Mr. Hyde gave rise to the expression “Jekyll and Hyde,” used to describe radical changes or opposites in a person or situation. The concept is applied to known psychiatric disorders, specifically something called dissociative identity disorder. Stevenson was fascinated with personality disorders and the interplay of good and evil. The whole story of Jekyll and Hyde has been applied more recently to all sorts of substance abuse scenarios.

On another note, this kit was the first styrene kit that Moebius produced, a new issue/reissue of the last kit produced in the classic Aurora Monsters series. The review kit I received is a 5th Anniversary Commemorative Edition. The original instructions are preserved by Moebius, including ledger-size directions, vintage artwork, and supply recommendations, like Aurora fireproof tube glue and 10 cent enamels. The kit is packaged in the original long box format, with the vivid imaginative artwork associated with the Aurora Monster Series.

There are 45 parts making up this nifty diorama. The parts are molded in medium brown on thick sprues, with some minor flash. The lab glassware and spider web parts are molded in clear plastic, also on thick sprues. Remember that this kit is largely a reissue of an old Aurora subject that has been brought back. Moebius appears to have cleaned up the kit well, while still preserving the vintage character.

Assembly is pretty straightforward. There is nice use of tabs for joint strength and alignment. The instructions consist of three steps, each with the old exploded-drawing style.

I varied the assembly sequence a bit, choosing to assemble Jekyll’s pants and shirt front first. I left the shoes off until the body was complete, to make sure that Jekyll could stand on his own. All of Jekyll’s lab coat parts were fitted and glued, and his arms and head were assembled. The fit between the lab coat arms and the body of the coat was not particularly good, but was easily fixed by filling with thick cyanoacrylate. The subassemblies were painted using a mixture of oils, acrylics, and enamels before joining everything together in the whole Jekyll/Hyde. The interior assembly tabs really helped with maintaining a realistic drape to Jekyll’s lab coat. I struggled with positioning his left hand around his throat, opting after several unsuccessful attempts simply to leave the hand appearing nearly to clutch the throat.

The wood floor base, table, stool, lab glassware, and lab rat were straightforward in assembly. I am not happy with how the two flasks turned out. I wanted the flasks to have something appropriately nasty-looking inside, with realistic fluid levels and angles. I was never able to reconcile gluing two halves, filling the parts with Tamiya clear green, and finishing clear parts effectively in one step. I needed to do this so the fluid in the flask Jekyll was drinking from could dry at the correct angle. I thought I could justify the obvious seams with “glass parts weren’t made as well in the 1880’s,” but actually all lab glass was blown back then, not assembled. Oh, well… I embellished the kit slightly by adding a scaled down MSDS (material safety data sheet) for Tamiya X-25 to the lab table. The spider appears to be about the size of a salad plate and the rat is the size of a small cat, adding to the disturbing effect of the diorama.

Conclusion and Other Wrap-up Thoughts

One of the really nice aspects of this subject is that there really isn’t any accountability for precise colors. This diorama was a pleasant 15 hours or so, with very little research involved. I felt completely free to experiment with wood grain, shadowing, assembly techniques, and other details. I Futured the rat’s eyes so the rodent is, indeed, beady-eyed. Making a mess on the lab table was satisfying. Tinting and blending Jekyll turning into Hyde was fun, although, like many scientists, fashion is clearly not one of Jekyll’s strengths.

I had a great time with this one, and I truly recommend this kit for a change of pace. I had the opportunity to develop figure- and eye-painting skills, and just enough problem-solving to make the experience rewarding without much angst.

Thanks again to everyone at Moebius and the IPMS Reviewer Corps!

All good laboratories need a rat, but not a spider that big
Previous Next