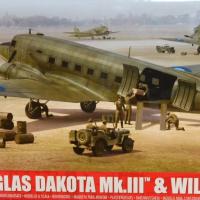 The Dakota, the C-47’s designation in service with the Royal Air Force, was used in European and Southeast Asia (SEA) theaters of operation by the British throughout WW II. Modified from the civilian DC-3 airliner design, C-47/Dakota transports provided a host of unique benefits which included exceptional speed, payload, reliability, ruggedness, and versatility. Dakotas hauled everything from oxen to airborne troops, often operating from unimproved or improvised airfields near front lines.

From 1942 until the end of the war in 1945, RAF Dakotas in SEA were instrumental in keeping Allied forces in China supplied after Japanese forces cut off land-based supply routes. Dakota crews and their American C-47 counterparts flew the perilous “Hump” of the Himalaya Mountains between supply bases in India and forward operating bases in China, enabling constant and prevailing pressure against Japanese forces.

The subject of this kit bears markings from the RAF No. 194 Squadron, based at Imphal Garrison in Burma in the Spring of 1944.

This incarnation of Airfix’ newly tooled DC-3/C-47/Dakota variants features the bonus of a 1/72 Jeep, Field Gun, and Utility Trailer. Half of Eisenhower’s war-winning material in one box!

Molded in soft gray styrene, with a suitable combination of recessed and raised detail, the Dakota, Jeep and Trailer make a positive first impression upon opening the box. The Field Gun, however, seems to lack the fidelity and crispness of detail of the other elements. Clear sprues are included for the Dakota and for the Jeep, with crisp, sparkling parts windows and lenses.

Cockpit and cargo bay detail include optional position crew/cargo doors and troop seats. A set of cargo loading ramps is also included with the dioramist in mind.

Only one marking option is included, and that’s as noted above. Being big fans of Operation Overlord, we were hoping for a set of D-Day markings, but to no avail.

Once again, junior modeler Camden (age 10) raised his hand to tackle a review build. On this one, we “tag teamed”: Camden took on the Dakota, and Dad took on the Jeep, Trailer, and Field Gun.

Overall, the Dakota build was straightforward, but did require a couple occasions of Dad lending 3rd and 4th hands to assist with holding and modifying parts and assemblies to fit and to set while keeping proper alignment. Most notably, wing upper and lower halves required a bit of surgery to remove interference between the forward wing spar and the locating features in the inside wing surface and a bit of 4-handed contortion was needed to hold the model, apply superglue and accelerator to get the outer wing assemblies to attach to the lower inner wing and fuselage while minimizing and filling a significant gap between the assemblies.

The Jeep, Trailer, and Gun builds were just plain fun. Although the plastic is a wee bit thick for a Jeep in 1/72 scale, the parts fell in place nicely and I was most pleased with the final results – with the exception of the result of my poor masking of the clear windshield and the resulting crazing from capillary paint. The trailer and gun fell together nicely, too, but the gun lacked the detail and visual “pop” of the Jeep and Trailer. Those wanting a serious rendition of the gun will need to add some scratch or aftermarket detail to make it convincing.

All elements were primed with HomeShades gray primer from Walmart. Dakota topcoat was Italeri Acrylic Olive Drab FS34088 and Dark Green FS34092, Vallejo Model Air NATO Black deicing boots and tires, and undersurfaces were left the primer color, which is about dead-on for FS36270 Neutral Gray. Jeep, trailer and gun were topcoated with Mig-AMMO SCC-15 British Olive Drab (1944-45) and with Tamiya Khaki XF-49 for seat cushions and tarps.

Once topcoated, Dakota and Jeep were glossed with Minwax Gloss Clear Acrylic and decals were applied using the Microscale system. Even with some pretty pronounced raised detail under the wing walkway decals, they settled down nicely after a little strategic scoring and reapplication of MicroSol.

Dakota and Jeep finishes were then dulled with an overcoat of 25/75 Future and Model Master Acryl Flat.

Whilst some have been critical of the exaggerated prominence of Airfix’ recessed panel line detail, it should be noted that they actually look pretty appealing after a coat of primer and topcoat of finished color, and also arguably alleviate the need to add washes to accent the lines.

Despite a couple of challenging assembly elements on the Dakota, the kits were a lot of fun for both of us to build. Four models in one box provides hours of modeling enjoyment and a great start to a historically-accurate diorama or display. We highly recommend this kit set to intermediate and advanced skill-level modelers looking for a nice addition of a Dakota or C-47 to their collections.

Thanks to Hornby America for the review sample and to IPMS/USA for letting us share the build with you.

Ready to Button Up