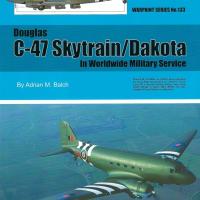 Adrian M. Balchis an aviation author and photo-journalist based in Swindon, England. He served in the Royal Air Force as an air traffic controller for over 22 years, from June 1971 to June 1993. He has been published since December 1966 in aviation periodicals and has authored books published through Airlife Publishing, The History Press, and Guideline Publications. You can find some of his photographs at https://abpic.co.uk/pictures/photographer/Adrian%20M.%20Balch.

Warpaint's latest is their standard A4 format softbound publication that is 88 pages, not including the covers. Sam Pearson contributes eight pages of color profiles and two pages of top and bottom color illustrations that feature 48 Skytrains. Sam Pearson also provides the 1/144 line drawings for the big fold out that totals four pages. A five view (Top. Bottom, Front, and side profile) of a C-47A comprises one side (a side profile of a C-47B is also included with fifteen cross-sections). The opposite side shows off nine port side profiles of the following: 1) C-47; C-47A, C-47B, C-33D, EC-47D, EC-47P, R4D-6Q, NASARR trainer, and the AC-47D. A starboard profile of the C-47A is also included. I counted 54 clear black and white photographs and 273 color pictures.

The front cover features a Sam Pearson color side profile of 42-100521, a C-47A-65-DL of the 79th Troop Carrier Squadron. Nicknamed “Night Fright”, she is painted in olive drab / medium green / neutral grey camouflage and is carrying D-Day Invasion stripes. A color photograph of a Dakota III that has been painted in the markings of David Lord VC’s D-Day aircraft graces the lower half of the cover. Captured near North Weald in April 1983, this aircraft was operated by Aces High, Ltd. The rear cover features three color photographs. Two are of rows of USAF C-47s at Davis-Monthan AFB with the lower picture of a line up of former Hellenic Air Force C-47s in April 1996.

Adrian M. Balch opens up with the design and development of the C-47 Skytrain with the DC-1 prototype. The DC-2 soon followed with a larger cabin and more powerful engines. A request for a sleeper version from American Airlines led to the Douglas DST (Douglas Sleeper Transport) which first flew on December 17, 1935. The DC-3 followed by replacing the sleeping berths with regular passenger seats. The advent of World War II brought on the military need for a transport, resulting in the C-47 Skytrain. Total production of military and commercial variants exceeded 16,000 aircraft, some of which are still in use today.

Service Skytrains (or Dakotas in British service) are illustrated on Page 5. The center photograph shows off the XC-47C prototype fitted with two Edo floats. Only five C-47Cs were built due to the huge performance drag the 41’ floats imposed. The top photograph depicts a flight of eight C-47 Skytrains flying over Alaska in 1944. The photograph on the bottom of the page shows the lineup of C-47 Skytrains preparing for D-Day’s invasion support. Country by country service is described starting on Page 9, and continues to Page 76. The Skytrain in Sweden’s service is described on Pages 56 and 57. The top of Page 57 shows a rather unique Swedish Skytrain, known as Tp,79, that was acquired from Germany in 1975 and remained in German camouflage. Note the contrast of the cargo door’s bronze green with the exterior green and grey camouflage. The bottom two color photographs show off Taiwan’s C-47 Skytrains.

The “Spooky” AC-47 gunship is shown on Page 70. The top two, color, photographs depict AC-47B, 43-0368, at Tan Son Nhut, Vietnam, in December 1967, with its three 7.62mm miniguns mounted on the port side. The third color photograph shows off the port side of AC-47D, 43-48701, also at Tan Son Nhut, Vietnam, in December 1967. The two camouflaged birds at the bottom of the page were electronic warfare birds. The first one is a EC-47N, 43-16055, based at Tan Son Nhut in June 1968. The second, with the strange looking nose, is a EC-47D at Tan Son Nhut in 1970. Page 79 reveals six photographs from the In Detail chapter. The three photographs on the left are some typical arrangements of the rear cabin of a C-47 Skytrain, showing full cargo use, to partial cargo use, to full passenger seating. The three photographs on the right focus on the AC-47 “Spooky” gunship, showing typical minigun installations. Six of Sam Pearson’s color illustrations are shown on Page 82, including six color scrap views. The top four profiles are USAF birds, followed by two RAF Dakotas. Of note is the second from the top C-47A that was based at RAF Wethersfield in 1960. The standard white top was separated by a blue cheatline over natural metal. The red, yellow, and blue thunderbolt adds a bit of color, along with the day-glo orange markings.

I was able to read Adrian M. Balch’s monograph over four days. The text is well supplemented with very clear photographs with good captions. Sam Pearson provides well executed color side profiles and the 1/144 line drawings. This is a nice reference on the tall-tail C-47 Skytrain and would be a handy addition to your reference library. Whether you are building any of the standard scale model kits (or even the box scale kits), I would consider this edition essential as an aide to your build. There are also no shortage of decals, photo-etch, and resin bits to detail your kit. Depending on your budget, you can start with HpH’s 1/32 C-47 Skytrain. In 1/48, you have the new Trumpeter C-47 or the classic Monogram/Revell Skytrain. There is also no shortage of kits that have been released in 1/72, 1/100, 1/144, 1/200, and all the way down to 1/700 scale. If anything, with the easier availability of 3-D printing, there will be even more details / conversions available. If you own any of the previous releases in the Warpaint series, you know what you are getting. If this is your initial entry into this series, you will be quite pleased.