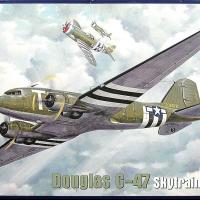 The first release of C-47/DC-3 kits from Roden has been issued as a C-47B from the 53rd TCW, 437th TCG, 83rd TCS. The parts have some nicely engraved detail on them, but on my sample it wasn’t entirely consistent. It looked great on the wings, tail, and the sides of the fuselage, but on the top and bottom of the fuselage halves, it faded out and was pretty faint. The rear door is molded as a separate part to fit into the space in the left fuselage half, and contains the main entry door and cargo door with its hinges.

Clear parts consist of two strips of windows which fit inside the fuselage, two landing light lens covers, the astrodome, and the windshield, which on my sample was missing from the sprue and wasn’t in the poly bag, either. A replacement was promptly and graciously supplied by MMD-Squadron, so construction could continue.

The fit was pretty good in most places, but the way the wing fits into the lower fuselage caused me a little head-scratching. On the real aircraft, there are two landing flaps beneath the wing center section and one on each inboard wing section…but not present on the model. I solved the problem by scabbing on two sheet-plastic flaps to the center section and scribing in the flaps on the outer sections. Not a contest-quality solution, but OK for this review.

The engines, props, cowlings, and exhausts are really nice. Both short and long carb air scoops are included in the kit, with the latter ones specified for this version. The exhausts have the delicate, to-scale heater muff intake tubes molded on. The landing gear is well-done and the tires have the correct profile.

The cabin windows weren’t quite as high on their plastic strips as they should’ve been to be flush with the outer fuselage skin when glued in place; the clear part for the cockpit was slightly too narrow and its cockpit windows were also too short in height. To rectify both problems, I faired in the cockpit clear part, sanded off its windows, and just painted over that and the cabin windows as well. After painting, I used black decal for the cockpit and cabin windows. The astrodome was slightly too big so I sanded its base down and reduced its size.

The kit’s painting instructions show invasion stripes only on the lower surfaces, dating the aircraft as post-D-Day when the upper ones had been removed or painted over; I opted to paint the full set of stripes. Many C-47’s had their tail fairings removed for glider towing duties, and it’d be simple to saw it off this model; I just elected not to. I painted my model with Tamiya acrylics: XF-83 Medium Sea Gray lower surfaces and XF-51 Khaki Drab upper surfaces, both being a few shades lighter than the standard OD and Neutral Gray. In this small scale, I think the lighter colors work OK. It’s left to the builder to paint the invasion stripes and de-icer boots – they’re not given as decals.

In fact, the decals were few, with the sheet giving four national insignia, two serial numbers, and the Squadron letters “T2” for the forward fuselage – no individual aircraft letter for the fin was included. The insignia was off-register, having a thin white outline to its lower and right edges; that’s not as visible in my photo as when I applied it to the model, but you can see the white below the bars. I deemed it too small to trim off precisely, so I discarded the kit insignia and substituted spares-box ones. The kit decals that I did use worked fine.

I’ve heard (but only via the rumor mill) that Roden’s planning a series of C-47/DC-3 variants, with this being their first issue. Fairly nice start in my opinion, and I’m looking forward to future releases down the line. I’m secretly hoping they’ll consider a B-23 Dragon too since the wings and tail were so similar.

Thanks, IPMS, for letting me review this kit. Many thanks also to Roden, and a special shout-out to supplier MMD-Squadron for their prompt assistance with a replacement windshield. I’ve seen this new Roden kit on my local hobby shop shelves, so it should be on yours as well.