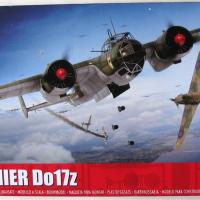 During the early years of the Second World War the Dornier Do17 was one of the Luftwaffe’s most important medium bombers. Developed during the early 1930s, first as a mail plane then as a reconnaissance bomber, the Dornier was nicknamed ‘the flying pencil’, due to its very thin tapering fuselage. While early versions used inline engines, the iconic and most widely used Z variant used Bramo radial engines, and featured a re-designed cockpit area, with the intention of providing more space and defensive capabilities for the crew. However this was not wholly successful; its small crew area and lack of power operated turrets making it easy prey for allied fighters. Of all the German medium bombers used in the Battle of Britain the Dornier was the slowest and therefore most vulnerable and the battle proved to be the aircrafts swansong over Western Europe, with the aircraft seeing only limited use in the later theaters of the war, before being phased out altogether by mid-1942.

WOW! Sorry, but I had to start with that. Upon opening the box you will find 4 grey sprues, a bag containing the clear sprue, a very nicely printed decal sheet minus the swastikas (by Cartograf), a one page guide for stencil placement and 16 page instruction booklet. 74 steps are used to build this kit and it is very well detailed. As with other Airfix kits the Humbrol colors needed are on the side of the box so if you use other brands of paint you’ll have to cross reference. The plastic is crisply molded with recessed panel lines and little to no flash. There are quite a few small and fragile looking parts so care need to be taken when removing them. The clear parts are very nice and very clear. There is also a lot of molded on detail in the cockpit, bomb bay and wheel wells. I did see a few injector pin marks but it looks like they will be hidden after assembly…YAY!

It all starts with the cockpit & fuselage interior as the first 21 steps are devoted to these areas. The cockpit itself is made up out of 17 pieces (not including the MGs) and the detail is quite nice. The one thing missing from here are the harnesses & belts though the 4 figures provided do have them molded on. You are provided a decal for the instrument panel but you’ll have to paint the detail on the radios and other instruments. The fold up seats for the bombardier and belly gunner have a nice “weave” on the upper side but the bottom side is solid, so if you’re into accuracy this may bother you a bit. I figure you can’t really see them so no big deal but that’s just me. A word of caution here…the pilots’ position assembly has small tabs on it (pieces D1, D31 & B11) and fits into C11 which was placed on the left fuselage half (A2). You have to clean these up good and test fit or you’re going to have a seat with a slight lean….like I do. Also, the bombardier & belly gunner seats are a challenge to place and I ended up using CA with the help of Zip Kicker to hold them in place. Step 13 is when you glue the fuselage together and while not everything is in there yet, it works out just fine, TRUST ME! The rear gunners seat, control panel, rear bulkhead & side panels and clear piece for the belly gun are placed after fuselage assembly. The one area that gave me a problem was the rear bulkhead assembly (parts A5, A6 & C8) and you need to pay close attention when assembling this because if you don’t set it just right it either is too wide to fit or too narrow and will leave space between it and the fuselage. The rear bulkhead also acts as part of the forward bomb bay bulkhead as does part of clear piece (E3) and they must be cemented together or you will have problems fitting the wing. I didn’t know this and there was much hate & discontent on my part.

Steps 22-41 deal with the wings, engines and nacelles and I must say Airfix did a fantastic job of adding the detail in the wheel bays, bombay, engines and flaps. For a 72nd kit out of box it is very impressive, heck they even have detail on the firewall but it will never be seen. (See picture) The wing spars (D4 & D5) help with the placing of the wing as it keeps it nice and even but on my sample I had to give the a swipe with a sanding stick so the lower half of the wing would fit right. Not a big deal but be aware of this and test fit. I also ended up with a very small gap on the underside of the wing root but since I was painting it black I decided to leave it be. The engine is a 3 part assembly. as are the cowls, and are nicely detailed but this is where I had a problem. Once the engines are built and placed on the nacelles you are to slide the cowls over them but when I test fitted, I found the engine too big. I had to sand the engines down a bit so they would. I’m not sure if it’s something I did or if it’s the kit but test fit these to be safe. The nice thing with these I think is that you do not have to glue them in place, Part B28 cements onto the top of the cowl locking it there.

Steps 42-50 deal with the tail, flaps and ailerons and Airfix has a fine job here also. The rudders & elevators are separate and posable as are the flaps. One word of caution, pay attention when placing the stabilizer assembly on the fuselage. I didn’t and it’s setting more to one side…..oops. I decided to show the flaps extended and it may not be accurate but the detail needed to be shown off. There are 4 tabs on each flap and they along with holes they fit in need to be cleaned up or you will have problems...TRUST ME.

Steps 51-62 Have you building & placing the wheels, struts, well doors and tail wheel. You are given two sets of doors for the landing gear, one for gear down and one for up. The struts (B5, 6, 8 and 9) are fragile and care needs to taken when removing these from the sprue. (My sample had one already broken, see picture) The main strut slides right into a spot in the well and was real easy to set and seems to be very sturdy. Another item to watch out for are the tabs on B8 & 9 as they fit into slot on the main struts, you have to clean them up or they will not fit. (See picture) The tires are nice and have a “weighted” look but the tread lines do not match up and I just sanded them a bit to tone the lines down a bit. On to the bombay…..

Steps 63-68 deal with the bombs and bay. Airfix has given us a few choices between 20 250lb, 2 500lb or going with a half load of each and putting an auxiliary fuel tank in the other bay. They have also given us two sets of bay doors one for open and one for closed. A good pair of tweezers will come in handy here as once you put the bombs on the racks you have small spots marked in the bay to place them and little room to work with. Patience comes in real handy here.

Steps 69-74 are where you finish up with the canopy, nose plexiglas, MGs, props, antennas and small clear pieces and there were no problems here. One word of advice, have good tweezers available to place the lower rear gun. You are to place it in its position now after everything is together and it is a slight challenge! I would also like to thank Airfix USA for replacing my canopy quickly. (I cracked mine while masking it!...too many Wheaties!)

Two choices are given:

Due to having aftermarket decals I only used a few of the kits and they went on without any problems.

I used Tamiya semi-gloss black on the underside and Testors Interior black on the upper surface to give it a subtle difference. Testors was used on everything else.

There are a couple items that should be mentioned here.

A new tooled 1/72 Do 17Z has been long overdue and Airfix has hit a home run with this kit. There is more than enough detail to satisfy most modelers and I highly recommend this kit for modelers except beginners, due to the many fragile and small parts plus it might get a bit frustrating with this much detail.

I would like to thank Hornby USA for providing this kit, the review corps for letting me build it and all of you for reading this….MODEL ON!!!

Struts on the Tree