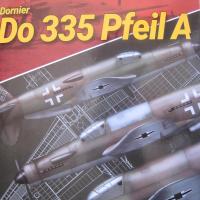 The DO-335 was designed as a heavy fighter for the Luftwaffe, and featured a pair of DB-603 engines, one mounted in the nose, and the other mounted aft of the center of gravity, with its propeller located behind the tail surfaces of the aircraft. This push-pull arrangement eliminated the drag usually associated with a second engine, and allowed much higher speeds. It was intended to counter the British DeHavilland Mosquito, which was causing severe problems for the Luftwaffe in attacking German night fighters trying to counter the RAF’s night bomber offensive. There were several prototypes built, each differing in minor details. Some were single seat, while others were two seaters intended for night fighting, although few, if any, were equipped with radar. The aircraft had an impressive performance, but very few were built, and they never went into Luftwaffe service units, as the war ended too soon.

The book is intended as a reference guide for modelers, and contains only a short text description of the history of the type, along with a number of 1/72, 1/48, and 1/32 scale drawings of the basic configurations. In addition, some color drawings, primarily in 1/48 scale, show the basic color schemes used, and a few color photos of the surviving example at the National Air and Space Museum. The main feature of the book, the drawings, are probably about the best to be published of this aircraft, and for anyone wishing to model this aircraft in any scale, they would be very helpful, even if you were scratch building in another scale.

If you are a Luftwaffe enthusiast, this is probably the best pictorial reference you will find of this particular aircraft. It is certainly worth getting a copy. Thanks to Bill O’Malley and Phil Peterson for the review copy, and thanks to Kagero and Casemate Publishers for providing IPMS members with a preview of the book.