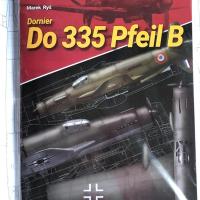 For fans of the Dornier 335 Pfeil (Arrow), this book will be an important addition to your library with a combination of 1/72, 1/48, and 1/32 scale line drawings and color plates. Modelers will find the details provided in the drawings as valuable references, and aviation enthusiasts will also find particulars such as the cross-sectional views interesting. I would highly recommend this recent release from Kagero as an addition to your library.

Written in both Polish and English, the book begins with a short introduction on the plane stating that the Do 335A did not meet all Luftwaffe requirements, specifically the thin cockpit armor prevented the plane from use as an interceptor. In the summer of 1944, the modified Do 335B was developed with improved cockpit armor and a new windscreen. In addition, the front wheel was larger which required the gear to be rotated 45° in order to retract into the same size wheel well. The developed plane was originally designated as the Do 335B-1 but was abandoned for the more heavily armed B-2 and B-3. The B-2 had a slightly larger wingspan of 13.84m and was flown in October of 1944. Other versions are discussed including the B-4, B-5, and B-6 and it is mentioned that the B-7 and B-8 versions were not implemented.

As I stated up front, this book is a great addition to the libraries of Dornier Do 335 fans and modelers alike! The production quality is top notch, and the foldout drawings could easily be framed and displayed. With no misses that I could identify, I highly recommend this publication!

I always like to wrap up by thanking the person in charge of the Review Corps, so hats off to Phil Peterson for his work, and to the folks behind the scenes like Bill O’Malley, who mails out the lion’s share of the review items, and the folks who place our reviews on the IPMS web site. In closing, a special thanks to the folks at Casemate for providing this book for review.