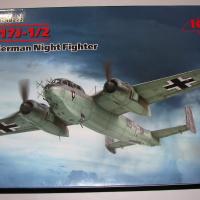 The Dornier Do 217 was a German multi-purpose bomber in WWII and was developed as a replacement for the Dornier Do 17. It was produced from November 1940 to May 1944. The Dornier 217J was the night fighter variant with BMW 801 engines, powerful armament and radar (on the J-2). In total, in 1942-43, there were produced 364 Do 217 night fighter of different modifications. They were in service with several night fighter regiments.

Upon opening a large & sturdy box you are presented with a whole lot of plastic! 8 runners & 3 main wing pieces of grey injected plastic and 1 clear runner and a 24-page instruction book and a very nice decal sheet. The plastic cleanly molded with very little flash and crisp detail and the clear parts are thin and very clear. Also, the decals are cleanly printed and in register. Don’t be alarmed at the number of parts as 92 of these are only used for the Do 217N kit.

Only 86 individual steps make up the construction of this kit starting with the cockpit. The first 12 steps deal with the cockpit and fuselage assembly with roughly 32 pieces needed for this. Care and patience are a must when building the cockpit as the instructions are a bit vague. TEST FIT….then test fit again to ensure proper fit. I thought I did and still ended up with the cockpit deck slightly canted. I also used some leftover Eduard Luftwaffe bomber seatbelts I had in the stash as you can see a lot through the greenhouse canopy. With the exception of part #A15 (rear bulkhead) everything fit very well, and I had no trouble, construction wise, in this area. I did have some issues with paint instructions and decals though as there is just a general color callout for the cockpit There is a LOT of detail in it and you will need to do some research if you want to make it look better. Also, BE CAREFUL of the control panel decal….it looks like you can place it on the part in one piece but in reality ALL of the dials are separate decals!

Step 13 is the first one where you must choose which variant you’re building as there are 2 different noses, one with radar and one without. Steps 15-17 deal with the tail wheel which I left off until later so as not to knock it off. Steps 18-20 are main wing assembly in which you add the upper half to the fuselage (made much easier due to the wing spar) then the lower halves and ailerons which I left off until later. This is an area I had a problem with as I ended up with a gap in the forward part of the upper wing half and had to use some Evergreen stock to fill it.

Steps 21-29 deal with the construction and placing of the tail assembly. Everything fit well here but be careful of the rudders as they can be knocked off easily. Steps 30-38 are the construction of the engine and cowling. The engine is very nice and looks great but after the cowl ring, fan and prop are placed on it…..you don’t see it. The cowling is made up of 7 pieces including the cowl ring and you must make sure you place the correct exhaust ports on the correct cowl piece. Once those parts are in place you will mate the three pieces together in the order that is shown, or they will not go together. If you have assembled these correctly the engine will slide right in from the front with little problem with the cowl ring being placed on last. There were no fit problems in this area either.

Steps 39-56 deal with the nacelle and main landing gear assembly. The struts, wheels and doors are made up of 9 pieces and go together easily but part #D31 (fenders) are a little tricky to place so take your time. I left the gear doors off until later so as not to knock them off. In my sample there was a small gap in the nacelle-to-wing area, so a little filler was needed. In steps 57 & 58 you will place the lower clear piece with the stinger, and I had small fit problems here also. Never did get it perfect and had to use a small amount of filler.

Steps 59-66 deal with the bomb bay/tail wheel. You can pose the bay doors open or closed as there is nice detail in here and you are given separate parts for the doors (open or closed) to make life simpler. Steps 66-73 deal with the final cockpit construction. The turret gun is an easy but fragile assembly so be careful there. I had some problems fitting the greenhouse canopy but eventually did get it placed correctly.

Steps 74-86 deal with the final small bits including armored windscreen, antenna, propellers, radar, nose guns and exhaust shrouds (if needed). The nose guns are small as are the radar posts so take care when removing them from the runner. The radar array in my sample was slightly damaged but was fixable. The propellers are set on small tabs, but these did not hold well, and I ended up making a new prop shaft so I can just pull the props off when I need to.

I used Tamiya paints for the upper surface and Model Master enamel for the underside. Use caution when decaling as the decal film is very thin. No setting solution was needed to get these to settle down.

A very nice kit and it’s about time we got a 48th scale DO-217J. It’s definitely not a kit for beginners but if you have experience and build 1/48th Luftwaffe aircraft I strongly recommend it…..you’ll like this kit.

I would like to thank ICM for this kit and also the review corps for letting me build it. More importantly, I would like to thank my mom, who passed away this past July due to a stroke, for putting up with me and my weird hobby. She tolerated my room being filled with these things and even left them alone after I left for the USMC. I think she realized it not only helped me with patience but also kept me out of a lot of trouble! Thanks mom.

Cockpit detail and filled gap in the wing to fuselage

Radar parts on the sprue

Small gap in the nacelle and wing.