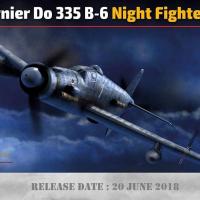 HK Models has released a 1/32nd scale D0-335 A and B single seat versions of the Pfeil and continues their 1/32nd scale DO-335 releases with this variant, the B-6 Night Fighter. The B-6 was a two-seat version and included radar for use in night fighting American bombers. This was a proposed variant and never built. HK has taken their initial kit and added a second cockpit and the needed radar antennas along with all the existing detail.

Assembly starts with the interior. I would say cockpit but that is not all you get with this kit. You get everything from the front engine, cockpit, fuel tanks, radar operators cockpit and the rear engine. This includes the bomb bay and the front wheel well. Color call outs are included everywhere. The molding of the kit is first class- slide molds are used and pieces like the ejection seat are a single piece. Photoetch seat belts are included for both cockpits, but I elected to use a set of Eduard belts I had sitting around. Detail is great everywhere with great sidewall molding in the cockpit, bomb bay and nose gear well. The front cockpit assembly is added to the front gear well and both are added to the bomb bay section providing a front to rear main assembly. A note here- make sure things are in alignment as it is critical for things to align later. The main spar for the wings is added at this time also.

Next come the front and mid engines. Note that the front has a major weigh trapped in it to prevent tail sitting and it works perfectly. Each engine is over 20 pieces and provides a nice replica of the Daimler Benz 603 engine. There are some differences between front and rear as they are mounted differently so don’t mix up the parts.

Next, the gun bay is built and added to the front bulkhead. This is then used to trap another nose weight directly in front of the cockpit. The front engine is added and is attached via the engine mounts. This was a little tight, but it is necessary to get straight as this aligns the front of the plane and other parts later. This is glued into the left fuselage half. There are pins to locate the position and it is critical that these align perfectly. More on that later. The rear radiator exhausts and painted and assembled and then added along with the rear propeller shift and the entire fuselage can be closed. This took me a little coercion and fiddling but the fit appeared to be good and I set it aside to let dry thoroughly.

I built both wings and was amazed at the neat engineering. There are separate wing tips and inserts for the different versions and the fit of the parts is excellent. The wheel wells are full detail. There is also a box glued in for the main spar to pass through. The inner front of the wings has a slide molded front edge so no seam to sand. Ailerons and flaps are separate if you want to pose them. Flaps can remain moveable for painting also. The landing gear can also be assembled and are made of six parts and look fantastic. I left off the gear door covers for ease of paint. The main gear socket nice and tight into the gear bay and provide great support for the weight of this large plane. And a note- the gear bays and all open panels have separate instructions for assembling them closed. Forgot to mention that!

At this point, I went back to the fuselage and began to add the top of the fuselage which is a separate piece (a two-seat trainer coming ??). Don’t forget the radar operators console at this point. And I ran into troubles. When I glued the fuselage shut, the back bulkhead towards the aft engine broke one of the pins holding the parts in place and slid up, naturally before the glue dried. So, it was slightly high. I had to grind off a little of the aft engine space bulkhead and the top settled right into place. The nose is also added by gluing the top gun cover in place which joins the front engine cover the instrument panel/fuselage area. I also glued the gun access panels into place closed.

The horizontal stabilizers were added, and all have moveable surfaces. The radiator cooling vents on the aft of the plane were added and two were left closed with the bottom one open. I added both wings at this time and with a little trimming, they fit tight as a glove requiring virtually no filling.

I elected to leave the front and rear engines, all wheel bays and the bomb bay open (too much nice detail to close up). I started prepping all these parts for paint. The cowling was prepared as well as the extra fuel tanks. Note that there are no direct holes for the fuel tanks or antennae. I drilled these at the locations shown in the directions. I also added the radar operators canopy and glued in place after masking. I used an Eduard mask for the main canopy primarily because they give great results and its quick.

I chose the first as it is similar to other actual night fighters of the time plus the He-219 I had already built. I used Xtracolor paints and added the splotching with a Sotar 2020 airbrush. The Xtracolor left it nice and glossy and the decals were added with no issues. There are not a lot but those that are needed are very well printed and apply easily.

I added a Flory dark wash to the panel lines and they settled in nicely after wiping them off. I was going for a slightly dirty look for more of an end of war look. To finish off the build, I finished off the landing gear and added the tires. The access panels for the engines were added and lastly the canopy and boarding ladder. Several passes of Dullcote flattened the kit and the wing tip lights were added in place.

This is a superb kit. So superb, I have already bought the single seat version. The fit is great especially if you don’t make the mistakes I made, it’s almost perfect. Highly recommended to all fans of WWII Luftwaffe and Luft 46 subjects.

My sincere thanks to Neil Yan and Hong Kong Models for their efforts to bring great kits to modelers everywhere.