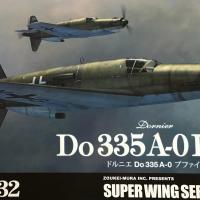 The Dornier Do335 was a German WWII heavy fighter that had a unique twin engine inline push pull setup that made it the fastest propeller driven German fighter of WWII. The Luftwaffe was desperate to get the fighter into production as soon as possible, but with engine availability problems by the time they got it into the fight there was only a handful of planes available and the war was about over.

It’s amazing how many planes were developed by the Germans that were way ahead of their time. Like the Messerschmitt Me262, the Horton Ho229 flying wing, the V-1 and V-2 rockets along with the Do335 and a few more. With the amount of bombing day and night by the Allies it’s a wonder the Germans got any planes developed at all.

When you first look at the box and box art you get a sense that this is going to be a wonderful kit to build. Then you open the box and see that you were not disappointed. There are 12 parts trees with just over 360 parts that look crisp, clean and very detailed, plus a mask set and a set of decals. Then there is the book of directions. It is a master of detail and actual kit pictures so there is no guessing about what part goes where and what color to paint the parts. Also there is a book that came with my review kit that does not come in the kit, but you can buy it separately, that has actual pictures of an original plane that is in the Smithsonian museum, of which the folks from Zoukei-Mura went and took numerous photos and measurements to get the correct size, color and detail for its rendition of the Do335. There is also three separate kit builds by three individuals that you can check out to see how their kits turned out. Back to the parts, when looking at the parts trees everything looks very good with no flash, crisp molding and very good detail. Four sprues are clear and the rest are light grey. The fuselage and wings are clear and have fine recessed panel lines and some dzus fastener detail but no rivet detail. I have one issue with the clear parts. The clear parts are not really clear they are more frosted than clear, which I think defeats the reason to be clear, you want to be able to see through to see whats underneath! So why they made them frosted puzzles me. The rest of the parts are well detailed, so detailed that the two engine blocks have the pistons and connecting rods molded in, why they did that also puzzles me. Why would you go to the trouble of molding in something that once glued together you will never see it. Why not put the camshaft, pushrods, rockers, springs, intake and exhaust valves in the engine too. Just an observation. The masks that they supply in the kit is a nice extra, you wont have to go out and buy aftermarket. The decals look good and are printed by Cartograf and are for only one aircraft with most of the stenciling and a few decals for the instrument panel.

Part 1 of the Build

It seems most kits start with the cockpit and its no different here. You jump right in to the very detailed cockpit. You have two options for the instrument panel. One is the decal on top of a raised bezel instrument panel and the other is a clear instrument panel and the decal goes on the back. The problem with the clear panel is you have to paint around all the instruments and the bezels just look too thick. I looked at both options and opted for the decal on the front. Once you put the decal on and hit it with some decal softener it melts right into the instruments. I think it looks better that way, but judge for yourself. The floor and bulkheads are well detailed and the ejection seat and seat belts looks scale and not at all clunky ( by the way this is the first fighter plane to have an ejection seat powered by compressed air). Behind the cockpit are the compressed air tanks, the oil tanks and the main fuel cell all of which look very real once painted. In front of the cockpit are the guns and ammo boxes, two MG151/20 machine guns firing through the propeller and one MK103M 30MM cannon firing through the propeller hub center. Daimler-Benz actually made the front engine crankshaft hollow so they could fire the cannon through the center. So overall the parts are molded very well and go together seamlessly with great detail. I’m excited to get to the rest of the kit.

A big thank you to Zoukei-Mura, Volks USA and the IPMS USA for the chance to review this fine kit.