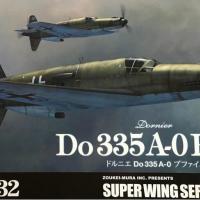 So we are finally to the point of paint, decals and final assembly. I started out with applying the paint masks for the canopies. The paint masks seem to fit very well and are applied easily. I started the painting by covering the entire fuselage with Model Master Metallics non buffing Aluminum. I do this for two reasons, 1) to find any defects in the fuselage and take care of them before final paint, and 2) because I like to have an aluminum base to all my aircraft that once painted when I do weathering I can chip away the final color to reveal the aluminum underneath and it looks more realistic.

Now on to the final paint colors. I started with the bottom first and applied Model Master Enamel RLM 65 Light Blue and applied three coats. After allowing it to dry overnight I masked the light blue bottom off and applied the first top color Model Master RLM 82 Light Green. I applied three coats of the top coat and let that dry overnight. After drying I started masking off for the splinter camouflage color by studying the instructions supplied. Once done masking I mixed up the Model Master RLM 81 Brown Violet and sprayed three coats and let that dry overnight. After removing the masking I prepped the model for decals by wet sanding with 1200 grit wet/dry sandpaper using water and once dried and cleaned I started applying the decals.

The decal sheet doesn’t have an overabundance of stencils or national markings, so the decals went fairly quickly. I started with the lower wings and the German crosses. I found the decals to be a little on the thick side and I applied them with a fair amount of Microset red. The decals did not melt into the panel lines very well, and I slathered a lot on. I applied the code letters next which went on either side of the crosses. They seemed to be a little thinner than the crosses and melted into the panel lines better. I then turned my attention to the top side and applied the crosses on the top of the wings and the sides of the fuselage, they all went on well and melted into the panel lines. The Nazi swastika are not shown on the instructions or on the box art but they are on the decal sheet. The decals are in two pieces so you have to line them up when you apply them on the vertical stab. Again I applied the code letters to either side of the crosses on the fuselage which happen to be over the rear engine exhaust stacks, all went on with no hassles. I finished up with all the stencils, some on the ailerons, elevators and rudders and some hand hold or latch stencils on some of the covers.

Once all the decals were applied and dried I put a semi-gloss clear coat over the whole fuselage and wings. Once dry I started the process of putting the final assembly of landing gear, gear doors, bomb bay doors, canopy, nav lights, landing lights, pitot tube and antennae. The landing gear and associated linkage are painted the interior color RLM 02 grey green. The landing gear and linkage seems to be kind of complicated but everything goes together easily and quickly. Once the gear is installed I finished it off with the tires and set it on its gear. The first thing I noticed was the plastic gear was a little flimsy and bent a little bit under its own weight, I would suggest getting the metal gear for this model it’s worth the extra money. Because this aircraft sits so high it needs a boarding ladder and the one on this plane has its own compartment and extends out when needed. I attached the canopy next and there is an option for open or closed, I opted for open. I installed the landing lights and clear cover and also the red and green position lights. The last thing attached is the pitot tube and antennae. So that finishes the paint and final assembly. I was very happy about getting the kit done and was very satisfied with the end product.

Overall I was very satisfied with the kit. The fit and finish was very good and the parts needed minor cleaning up. Some of the parts had some very noticeable mold lines but overall not bad. The one beef I had was with the clear parts. They were molded not clear but were opaque and had a rough surface that I had to sand the entire fuselage and wings to get them smooth. If there was one thing I would have them change in the kit it would be to redo the clear parts and make them polished so the clear parts are actually clear. Even the landing light cover I had to sand and polish to make it truly clear. The other con I had was there were a few sink marks in the fuselage which were in some strange places and I thought should not be there. One other con I have is the plane is very tail heavy and there was no weight supplied and really no place to put the weight. The only place you could put weight would be where the ammo cans are placed in front of the cockpit below the guns. You will have to remove everything in that area and stuff as much weight possible. I placed 1 ounce of weight right on the nose and it still did not push it down so it would probably need at least 1.5 or more ounces to get it to sit on its gear.

So in conclusion I found the kit to be one of the nicest kits I have built so far and for having over 600 parts it went together well and didn’t seem to overwhelm you. I recommend this kit to anyone who enjoys 1/32 scale German aircraft.

Thank you very much to Zoukei-Mura and IPMS for the opportunity to build and review this very nice kit.