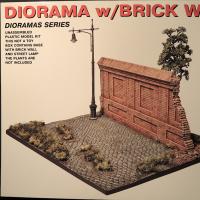 This kit is one of MiniArt’s Diorama Series and includes a damaged brick wall section cobblestone street, and streetlight. The kit comes boxed with parts in a plastic bag. Kit contains three vacuum formed pieces for the wall sections, wall cap and base. The kit also includes one molded plastic sprue for the streetlight fixture. The base section has cobblestone pavers, piles of rubble, and rubble behind the wall. The cobblestone base has a worn vehicle track at an angle across the front. The wall is set at a slight angle and the base appears to have enough space for one 1/35 scale vehicle plus a few accessories.

All of the vacuformed pieces have small dimples from the forming process that will need to be scraped off. A MicroMark chisel or a chisel-pointed X-Acto blade works well for removing the dimples. Some of the dimples are hollow, leaving holes through the vacuformed plastic that I filled with superglue. The molded parts have nice detail with very minor mold seams and fairly small sprue connections that are easy to clean up.

Assembly of the two halves of the brick wall is complicated due to the butt joint of the thin edges particularly, at the partially collapsed end. The addition of some plastic tabs helps to reinforce the joints. The broken end of the wall needs filling with putty and lots of shaping to remove the raised ends of the vacuformed pieces. I added sanded tile grout to the edge to create a rougher texture for the broken brick. The rest of the assembly is straightforward and goes together well. MiniArt provides tips and techniques for building and finishing vacuformed dioramas on their website.

The vacuformed base is flimsy and couldn’t support a model. I filled the underside of the base with plaster, which made it nice & solid.

Pavers in the street were painted light gray, and some stones highlighted with dark gray and sky gray. Dirt was added to the rubble areas to add a little more texture, as they’re fairly smooth.

The brick wall was painted red brown with darker and lighter brown highlights. Lighter streaks were added with oil paints. A dark wash was added to both the stone pavers and brick wall. Europe dust pigment was scattered over the soil areas and some of the pavers.

The kit results in a nice little diorama setting that can be used with many types of vehicles, figures and many different eras. The base works well with plaster filling to give it some solidity. The joints in the vacuformed brick wall are the only difficult areas with the kit. The broken-off end of the brick wall needs to be backed-up and patched heavily to remove the vacuum form seam and provide a more realistic appearance. A fairly simple kit that provides a nice diorama setting.

A nice kit by MiniArt that provides a diorama that can be used with many kits. Thanks to MRC for their continued support of the IPMS review program and for supplying the review sample.

Diorama with Kit
Previous Next