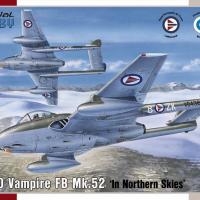 The De Havilland (English Electric) Vampire was conceived in 1941 and first took to the sky in 1943. According to Wikipedia it was used by over 30 nations and was last flown operationally by Rhodesia in 1979. Given the longevity of the Vampire, and its interesting twin boom look I took on the challenge of this build and review.

This release of the Special Hobby Vampire (Formally CMK molds) is the Northern Sky version that includes decals for three Northern European nations aircraft, specifically from Norway, Sweden and Finland. As far as construction this is a very straightforward build beginning with the cockpit. The pilot’s office leaves a bit room for those who like to add their own details but stands well on its own. Unlike traditional fuselage construction the fuse halves are joined top to bottom as opposed to side to side. Based on my build, I would recommend you take the time to join the upper and lower wing halves and double & triple check the wing to fuselage fit and make adjustments to the fuselage halves carefully in advance of joining them with cement. Likewise, take the opportunity to place weight in every available nook and cranny as humanly possible. I filled the nose forward of the instrument panel as well as the entire nose wheel bay with (Liquid Weight) and as best as I can tell I came no where near getting this kit to sit on its nose gear. It may just be necessary to glue it to a base.

With the fuselage complete the wing halves are joined to the fuse followed by the tail booms /stabilizer assembly. Just about the only filler I really needed during this build was where the booms attach to the wing. Once the booms are attached, this pretty much finishes up the build of the kit. The Canopy was the last item to be fitted to the fuselage and preparations began for painting. Following the paint & decal application, the landing gear were added to the aircraft. Nothing to see here as the gear fit well and little effort it needed to get them aligned. My only landing gear issue lay with the nose wheel. The nose wheel is in two parts and I was completely baffled by the parts fit. Out of the box the nose wheel when assembled looks more like twin nose wheels as opposed to the single wheel it should be. Go figure. I just added some putty and sanded the wheel back into shape

So overall this is a reasonably easy build. Not that I would recommend this for someone’s first build, but it is not overly difficult. I’ve purposely left the decals to the end of the build. They are a letdown to the rest of the kit. The registration really left a lot to be desired. Had I looked closely and carefully I might have noticed this issue and chosen to go with markings other than the Norwegian aircraft where the registration wouldn’t have been so obvious. Just take a look at the photos, specifically to the roundels. The white edge along the bottom of the marking should jump out at you. I also felt the opacity of the decals were too thin. Unusable, certainly not. Just be careful. Please ignore the nose gear decal orientation. Somehow, I managed to glue it on inverted placing the B letter backwards. This is not the fault of the kit but the builder.

My plans are to keep an eye open at the IPMS shows for another boxing of this kit. Other than the decal issue, this builds into a very nice DH Vampire model. I would really like to extend my thanks to Special Hobby for making this kit available for review as well as to the IPMS USA review team for giving me the opportunity to review the kit.