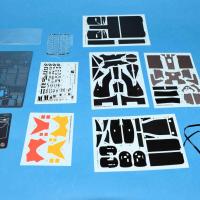 Also included are multipage instructions and these were done perfectly. Each step in the aftermarket package matches the steps in the kit instructions so as you go along, check both sheets.

The carbon fiber decals cover almost all of the entire body and cockpit of the car and are in several colors depending on location. You can see the ones covering the seat in the attached photos. These decals are thick, and I spent time and effort getting them to settle with Solvaset, but they will settle. There are 46 decals of dark carbon fiber and 9 for the seat and cockpit. Unless you leave the body loose or off, many will be hidden. They are a great improvement to the underbody and frame and are visible. Take your time and let them dry and set well before adding the overlapping ones.

The sticky aluminized sheet is cut into six parts utilizing the stencils. There are the parts surrounding the engines. Use a sharp knife as the sheets are thick and have some tight trimming. They do provide a nice reflective surface, but none will be seen if the body is glued shut.

The two photoetch sheets replace parts such as the front and back wing fins, cooling for radiators and intercoolers, supports for the seat belt and many others. That being said, there are many extra parts left that are not called for such as fasteners. There is a set of buckles for the seat belt. A length of woven belt is provided. I cut this to length and tried to get the buckle material through the belts. They frayed and I gently heated the ends and flattened them and could not get them threaded. They look fantastic but, in the end, I used foil for the belts.

There is a sprue of chromed connectors of four different types. These are not mentioned in the instructions. I assume they may be used to plumb and wire things. There was no mention anywhere of these parts.

Lastly, there is a decal sheet with lettering not mentioned, several sizes starting with “M” and then a line of indicators. Looking at the real car, it had Marlboro’s name on the car six times. Each of these decals is provided with the first letter and then each of the remaining seven letters as individual decals. The decals on the rear fin are split as the fin is split also. So to label this on the car takes a total of 48 decals. The individual letters are aligned with the lettering marks attached to the M which is clever. Not sure if legalities or political correctness made them take six decals and turn them into 48 but they were very prominent on the real car and I added them.

This set is very comprehensive and makes the kit really stand out. To me, the markings along plus carbon fiber make the kit really pop. And if you leave the body loose, this is mandatory.

Thanks to Platz/NUNU for the opportunity to build it. More pictures are available at the full build of the kit too!