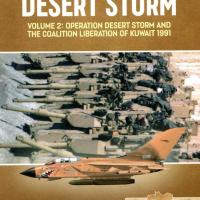 From the publisher’s notes on this book: “Early in the morning of 2 August 1990, aircraft of the Iraqi Air Force bombed Kuwaiti air bases, and then the Iraqi Republican Guards stormed into the country. Thus, began what would be called the ‘Gulf War’ – or the ‘II Gulf War’ or ‘II Persian Gulf War’ – fought between January and March 1991.

Although encountering some problems, the Iraqi forces occupied Kuwait in a matter of a few days. However, when President Saddam Hussein of Iraq unleashed his military upon Kuwait, little did he know what kind of reaction he would provoke from the Western superpowers, and what kind of devastation his country would suffer in return.

Concerned about the possibility of Iraq continuing its advance into Saudi Arabia, the USA – in coordination with Great Britain, France, and several local allies – reacted by deploying large contingents of their air, land and naval forces to the Middle East. Months of fruitless negotiations and the continuous military build-up – Operation Desert Shield – followed, as tensions continued to increase. Determined to retain Kuwait, and despite multiple warnings from his own generals, Saddam Hussein rejected all demands to withdraw. The USA and its allies, ‘the Coalition’, were equally as determined to drive out the invader and restore Kuwaiti independence. Gradually, they agreed this would have to be by force.

Following an authorization from the United Nations, the Coalition launched the Operation Desert Storm, on 17 January 1991, opening one of the most intensive air campaigns in history. The last conventional war of the 20th Century saw the large, but essentially traditional, Iraqi Army overwhelmed by forces trained and equipped to exploit the latest technologies.

Desert Storm reveals the whole war fought between Iraq and an international coalition, from the start of this campaign to its very end. Largely based on data released from official archives, spiced with numerous interviews, and illustrated with numerous photographs, colour profiles and maps, it offers a refreshing insight into this unique conflict.

Volume 2 of Desert Storm tells the story of the air campaign, naval operations, the 100 hours of the land war, and the aftermath of this conflict.”

This book was an enjoyment to read and review. As I began my review, I started with the extensive review of the abbreviations and soon found that I was quickly returning to this list, and often. Although I initially had a reasonable grasp of constituted the 1991 Middle East war in Iraq, I quickly found just how little I really knew about the war and the events leading up to war.

In general, the narrative follows the invasion of Kuwait by daily discussion of the ground and air combat. There is also an informative description of the Iraqi organization defenses and how they were deployed throughout the combat.

I found the tables outlining the aircraft and ships involved greatly exceeded my prior understanding. The sheer number of aircraft by operational types and numbers were truly overwhelming. The specific types of aircraft, along with numerous black and white photographs is covered in the narrative descriptions.

There are also numerous descriptions of the allied/NATO and the Iraqi (IrAF) aircraft and their deployment as well. One of the most interesting photos included in my assorted scans shows the burned-out hunk of a MiG-25 illustrating nose section totally destroyed and literally melted away.

Speaking of photos, without attempting to count the actual photographs, there are a large number of black and white images in this book as well, seven pages of color side-views and several color maps of the Kuwaiti battle.

My thanks for this review copy and my thanks to both Casemate Publishers and IPMS/USA for my opportunity to review, read and thoroughly enjoy, and provide this review.