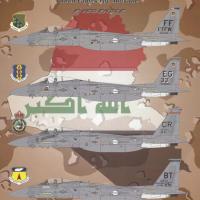 The F-15, no other aircraft in history has been as successful in air-to-air engagement, as the Eagle. Prior to Desert Storm, the Eagle was used successfully by the Israelis but had been unproven in use by the US Air Force.

The F-15C is a beautiful aircraft and during Desert Storm it proved itself so successful scoring 32 aerial victories of the 41 victories achieved by the US forces.

Bullseye Model Aviation has produced another stellar sheet. This one focuses on the MiG killing Eagles used during Desert Storm by the 1st Tactical Fighter Wing (TFW), 33rd TFW, and the 7440th Composite Wing (Provisional). There are markings for 24 F-15Cs. TWENTY-FOUR aircraft. That is impressive in itself. The research is impeccable. Aircraft markings are shown during and immediately after Desert Storm. Each aircraft is detailed with both side profiles. To show the level of research there is are notes about Avionics Bay #5. Yes down to the color of a specific panel. That is great stuff.

The decals are designed to be used on the Great Wall Hobby kits but can be used on other F-15C kits. All the kits are painted pretty much the same in FS36320 and FS36375. The kill markings are a variety of emblems, including stars and flags. Many of the aircraft carry nose art.

The decals and instructions are contained in a large ziplock baggie. The instructions are printed in full color eight high quality pages. There are twenty four aircraft on the sheet. One page has the upper and lower plan view, since all the aircraft are painted basically the same. There is a Fact Sheet that gives a brief of the units and commanders, as well as, the armament configuration used during the war. On the back of the fact sheet is a stencil guide showing where they go.

The actual decals are printed by Cartograf so they are world class. They are in perfect register and have good color saturation. They are thin and react perfectly with settling solutions. I’ve used Microsol, Mr. Mark Softener, and Solvaset on them with no problems.

The actual decals are printed on two sheets. The first larger sheet has all the markings of the individual aircraft. It has the crew names, kill markings and the unit markings. There is a smaller sheet that contains stencils for three aircraft.

Colorful MiG killers printed by a world class decal company and meticulously researched. To top that off there are enough decals for three aircraft including stencils and a choice of 24 aircraft. I can’t recommend these decals enough. They are exactly what you’d need for your Eagle.

These decals, and all of Bullseye Decals, are available exclusively at Sprue Brothers Models at www.spruebrothers.com