Desert Battle Series: Skull Clan – New Amazons. This is not the place for strangers! 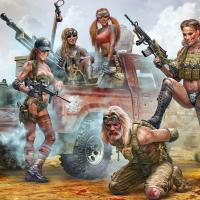 Master Box sure enjoys exploring new venues for its range, and their growing post-apocalyptic series is one really worth watching. As always, the concepts are inventive and the execution quite pleasing. This latest five-figure set (really a diorama in a box) is no exception.

Four lovely ladies of the notorious Skull Clan have captured some unfortunate from another tribe and are enjoying their moment of gloating before hauling him away to an uncertain fate. All of the characters in this set are completely distinctive and have a LOT of character. As I’ve mentioned before, Master Box is unique in the modeling world for sculpting their figure sets based on illustrations rather than the other way around. As a result, there are typically small differences between the illustration and the figures provided, which can be fun to spot if you’re in the mood. In this case, the one thing shown on the box art that I regret not seeing in the kit is the bedraggled stuffed bunny hanging off the “boss lady’s” belt. It was a nice touch I would have enjoyed seeing on the sculpt. Still, the figures really can’t be beat. All four ladies are dressed pretty lightly, but not in an offensive way, and the kit comes with some nicely molded weaponry, which I personally chose to replace with a bit more variety.

On the box, one lady is seated on a gun platform in a “technical,” but I wanted to make mine just a bit more futuristic, so I placed her on a sort of “hover bike” from a Bandai set. She fit surprisingly well. The other two figures are sort of lounging against the machine, and probably won’t look quite right until I can transfer the whole scene to an appropriately devastated landscape. I also painted them all in somewhat livelier colors just to have a bit more contrast than was shown in the illustration.

In the hands of a really expert figure painter, these should really shine, and certainly are unique in the plastic modeling world. I have yet to find myself disappointed with any of the fantasy or science fiction figures Master Box has produced up to this point. They’re always exceptionally well done and certainly the most imaginative stuff on the market today. You really can’t be disappointed with kits like this – they’re simply too fun. Good hunting!

My thanks, as always, to Master Box for continuing to stretch the boundaries of plastic modeling, and to IPMS/USA for a chance to play with this terrific set.