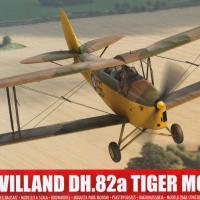 Sir Geoffrey DeHavilland began designing airplanes before World War I, and although his first effort, the No. 1 Biplane of 1909, crashed on its first flight, his subsequent designs all made up for his initial failure, and he went on to become one of the world’s foremost aircraft designers. His most famous product during World War I, the Airco DH-4 and later variants, became a mainstay in both military and civil aviation after the war, and by the mid twenties, his new company, DeHavilland Aircraft, was producing substantial numbers of the DH-60 Moth, a light biplane designed for training and touring. This was an open cockpit tandem type powered by a variety of engines, some designed in DeHavilland’s shops, and it served to establish DeHavilland’s reputation for producing light, economical, safe, and efficient training airplanes for civil use. In addition, the Moth series was an excellent primary trainer, and the type was used by a number of air forces through the end of World War II.

In 1931, DeHavilland developed an improved version of the Moth, designated DH-82A. This was powered by a 130 hp. DeHavilland Gipsy Major I, and featured swept-back wings and a more refined landing gear. Initial production models went to the RAF, but later, most of the civilian flying clubs in the UK used Tiger Moths until the outbreak of war, when they were taken over by the military. This is why some DH-82’s operated in RAF camouflage and civilian registrations for a brief period. Over its production life, over 7000 were built, and factories were established in Australia, New Zealand, and Canada. A few were even used by the USAAF during the war. A radio-controlled target drone version was produced before the war, called the “Queen Bee”, and many were operated by the Royal Navy as floatplanes. The DH-82 remained in RAF use long after the war, and many were sold as surplus in the forties and fifties, and quite a few remain on civil registers throughout the world, many operating as “warbirds”.

Like its American counterpart, the Stearman PT-13/17 series, many DH-82’s were used to start crop dusting companies, especially in the UK, Australia, and New Zealand, and my favorite is the first Australian duster of 1953, appropriately registered VH-DDT. I couldn’t resist modeling this one a few years ago. There was a four seat modification called the Thruxton Jackeroo, and a few were rebuilt as World War I airplanes for movie use. About 250 remain airworthy.

The first Airfix DH-82 kit probably appeared around 1953, and was the fifteenth kit issued by Airfix in 1/72 scale, carrying the kit # 95. Later, the kit was produced in the US by US-Airfix. This was a very basic kit with little detail and overdone fabric, but with a, little effort, a reasonably accurate Tiger Moth could be built. But with Airfix’s new program, upgrading their basic kits has resulted in some really spectacular kits being issued at reasonable prices, the modeler of today is given a really high quality start in building a replica of this famous aircraft.

The model consists of several highly detailed sprues with much improved surface features. The cockpit interior is adequate, consisting of a floor, two seats, control sticks, and two very nice instrument panels, in addition to good sidewall detail. Everything fits together the way it should, and the outer wing struts are joined together by expendable struts, which should be left on until the upper wings are attached. Then the pieces can be trimmed off, and repainted, resulting in the wing being strongly attached in the correct location. They did this with their Gladiator kit, and it is a good system. One part that is included but not used on the DH-82A is the rear fuselage fairings that were added to solve a “problem” in spin recovery that many people thought unnecessary. However, British Civil Aviation authorities require the mod if the planes are going to be used for acrobatics, and since most are, many currently flown examples have them. The part would require trimming off the rear fuselage and adding the parts, but this kit doesn’t require them, so for now, the part is extra. Put them in the spares box for further use. In addition, a tailskid and tailwheel are included, as are cockpit doors, which require trimming of the cockpit area if you’re going to use them.

The instructions include passages in no less than 17 different languages, and 21 non-linguistic assembly drawings as well as 7 rigging assembly diagrams. There is no sprue diagram or color guide, although the box art contains most of the exterior color information for one aircraft, #56, N-9181, of No. 10 Elementary Reserve and Flying Training School, RAF Yatesbury, Wiltshire, England, in 1940. The color scheme checks out, as there is a good photo of the aircraft in Stuart McKay’s book Tiger Moth, a publication anyone interested in World War II aviation shouldn’t be without. In addition, Owen Thetford’s Aircraft of the Royal Air Force Since 1918 also has some good material and a very useful three view, while Donald Hannah’s paperback, DeHavilland, part of the FlyPast Reference Library, gives a good account of the company’s and airplane’s development. There is a lot of material available on the DH-82, so you shouldn’t have any trouble finding a suitable airplane to model, especially since this is not an expensive kit.

The kit has very little flash, and goes together easily. The interior should probably be painted RAF Interior Green, although this information isn’t in the instructions. A view of some interior photos of the cockpit will give an idea of the location of various details. Little filler is needed for the fuselage, and the lower wings are molded in one piece so they attach to the fuselage at the right angle. I would suggest painting the airplane after basic assembly, but before the upper wing is attached. The instructions are right on when they suggest an assembly sequence. They are clear, and even a modeler with limited experience should have no trouble getting this baby together.

A couple of points could be mentioned here. The sprue attachment points are very easy to trim off, and the plastic itself is soft and easy to work with. The inside cabane struts could have

better attachment points at the fuselage, so glue the outer struts first, leaving the cabanes until last. Also, install the engine and windscreens (It’s a British aircraft, remember), before mounting the upper wing. The model is somewhat delicate, so be careful when handling it.

I decided to use the kit decals, as they looked very good, and the color scheme was verified by a photo in McKay’s book. The decals are very thin, and do not require trimming. I used some setting solution on them, but I don’t think it was necessary. The RAF used a rather odd choice of colors, as the lower wing upper surfaces were painted in a slightly lighter shade than the top wings, theoretically to make the lower wing, while in shadow, appear to be the same color as the upper wing surface. They went to a lot of trouble to do this, and I can’t see how it made much difference in the airplane’s camouflage, but then, the Brits were always sticklers for detail. I just used the same colors. Who’s going to notice? Once I got the airplane painted, a coat of Glosscote resulted in a glossy finish for the decals, and once they were on, a coat of Dullcote got rid of the gloss, and made the airplane look more realistic.

Rigging the biplane was a relatively easy task, and I used fine electronic wire rolled out and attached with white glue. The only problem here was the fact that the control horns on the elevators and rudder were too small, making it difficult to run the control cables along the side of the fuselage. The instructions do not even mention the elevator cables, which go inside the fuselage about halfway between the cockpits and the horizontal stabilizer, and these will be the most difficult parts to get lined up correctly. Start the rigging process with the inside wires and work to the outside or you’ll have problems getting the last wires in place. One inaccuracy that shows in photos and drawings is the control cable system. The horns are alluded to on the rudder and elevator tops with small nubs, and are totally missing underneath the elevators. I used the nubs, and because I was too far along, left them in place. On my next one, I’ll trim them off and scratchbuild all of them, as they need to be much larger than they are. As they are now, it is difficult if not impossible to line up the rudder and elevator cables, except for the bottom one, which I made from strip plastic. On the undersides of the wings, there is an aileron cable horn that is molded as part of the wing. This should be a small horn, with exposed cable. Check photos on this one. Some aircraft had aileron balances, while others did not, so check your photos before making this addition. This was a spin recovery modification.

This kit is a much better one than the original Airfix issue, and will probably become the generic DH-82 kit in 1/72 scale, even though there are several other kits out there. My suspicion is that Airfix will issue several variants of the plane, and the development potential for this kit is excellent. This one is worth stocking up on, especially if you like British biplane trainers. You could build fifty of them and not duplicate anything. There are a lot of civilian color schemes that are just begging to be built. Don’t miss out on this one.

Thanks to Airfix and IPMS’s Dick Montgomery for the review sample. It has been an enjoyable week. And I learned a lot about Tiger Moths in the process. I’d love to get a chance to fly one.