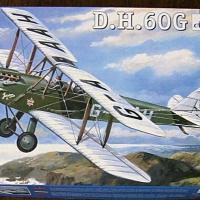 First of all, thanks to Amodel and IPMS/USA for the opportunity to build this kit. I received the kit from fellow IPMS Phoenix club member Brian Baker. It had been sent to him for review, but since he only builds 1/72 aircraft he offered it to me to build. The reason that he received it in the first place is that fact that the instructions state that the kit is 1/72 scale. However, the box and kit number indicate that it is indeed 1/48. Since I prefer 1/48 aircraft, I agreed to give it a go.

The kit is molded in a very light grey plastic. There are 92 pieces, of which about 8 are optional and one is not used. There is also a small acetate sheet that contains the windscreens. These are marked on the sheet and you need to cut them out yourself. Instructions are on 6 A-4 sized pages. There is a parts map on one page which is essential for finding the parts, since the sprues contain no numbers. The necessary paints are listed on the first page by color name and Humbrol number. There are decals for three options, two in natural metal and one painted green and white. I opted for the green and white version because I thought it looked the most interesting. The decals are matte and in good register.

Construction begins in the cockpit, which comprises a floor, center console, two seats, two bulkheads, two instrument panels and a control stick. There are also two identical sets of rudder pedals, but one set needs to be cut into left and right sections per the instructions before being glued to the center console. I cut mine according to the instructions, but ended up cutting them even more because they were too wide to allow the fuselage halves to go together. It was also during the first step that I began to notice inconsistent painting call-outs. Colors are indicated for some of the parts, but not for others. This continued throughout the build, so I took artistic license in several areas.

Fit of the parts is typical for a limited run kit. In other words, test fit everything. The cockpit floor actually makes up the bottom forward portion of the fuselage. The fit here was a little rough and required sanding to get a halfway decent fit, then filling to eliminate a few gaps.

The engine and forward fuselage are next to being assembled, and I am still not sure if I got it all together correctly. I had to do a lot of trimming, sanding and test-fitting to get it all together. Nothing that cannot be handled by a modeler who has patience and experience in dealing with short run kits.

The lower wings have very small attachment points and require care to get a satisfactory fit. The vertical and horizontal tail surfaces fit fairly well, but a little trimming and sanding were needed to get the best fit for the vertical tail.

There are two different styles of radiator, but I couldn’t tell which one was needed for the version I was building. I think I chose the right one, according to some photos I found on the internet. The radiator is then attached to the fuselage be means of some supporting struts. I sanded the inside of the struts where they come in contact with the fuselage to achieve a smoother transition between the struts and their attachment points on the fuselage. Don’t forget to cut out and attach the clear acetate windscreens at this point, since it is very difficult to do after the upper wings are in place. Guess how I know that?

The exhaust is attached next, and this is where I took some artistic license. The version I was building is actually supposed to have the short individual exhaust stubs attached, but the long exhaust that runs down the fuselage side looked really cool, so I used it instead. The longer exhaust needs to wind through the radiator struts, so don’t try to attach it before attaching the radiator struts.

It was at this point that I did the painting and decal work. I used Humbrol 30 for the green and Gunze Mr. Color Super White (156) for the white. The decals went on well with the Micro Set/Sol system, and even the large letters on the wings showed no signs of silvering. I then took an extended break from the model. I was really dreading attaching the upper wings and was expecting to have numerous problems fitting the struts, since I had had quite a few fit problems. As it turned out, the struts were all the right size and the upper wings actually went on quite easily.

The landing gear assembly looked like it would be pretty fiddly and hard to get everything lined up, so I used Testors liquid cement which gave me time to move things around before the glue solidified. After getting all that lined up and letting it dry overnight, I went about touching up several areas of paint. After a final coat of Polly S clear satin, the Gipsy Moth was ready for rigging. I used some fine steel wire that I had lying around for the rigging and some elastic thread for the control wires. There are no rigging instructions included, so I used the box top as a reference.

All in all, I was happy with the results. It is a limited run kit, so it took some effort, but intermediate to advanced modelers should have no problems with it. I found a website with some nice color photos of Moths so there are quite a few colorful possibilities for this kit. Thanks again to Amodel for the opportunity to build this historically significant aircraft in 1/48 scale.