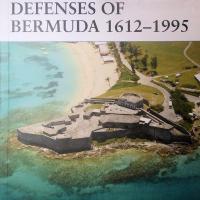 Osprey’s Fortress series is a well-established line of books covering a variety of fortresses around the world. The Fortress series of books started 15 years ago with the Japanese island defenses in World War II, and with this installment, Defense of Bermuda, the series is up to over 100 titles.

The books begins with a history of the geologic formation of Bermuda. When people think of Bermuda, they often thing of it as an island, but “Bermuda” actually consists of 181 islands that formed when a volcano rose 14,000 feet off of the sea bed of what would eventually become the Atlantic Ocean. Bermuda was first discovered by the Spaniard Juan de Bermúdez in 1505, but the first European settlers on the island were actually part of the English Virginia Company, who settled the colony of Jamestown. These settlers arrived on Bermuda really by accident when they were shipwrecked there. Located just over 650 miles from the coast of the Carolinas, Bermuda was to become an important English settlement and naval base during and after colonial times and the American Revolution.

After the brief background on the formation and settlement of the Bermuda islands, the authors go into great detail about the fortifications and defenses of Bermuda, which started shortly after the first settlers arrived. The islands are surrounded by a coral atoll which creates a natural barrier for the islands and restricts entrance to the natural harbors to only a few locations. In an effort to protect these ports and harbors from mainly the Spanish, but also pirates, the English began building a series of fortifications near the entrances to these waterways.

These original fortifications were basically redoubts with a few smooth bore cannons. As the military importance of the Bermuda grew, so did its defenses until is became known as the "Gibraltar of the West”. Over time it has become more difficult to identify all of the fortifications made on the island, but it is estimated approximately 50 forts were built to provide protection to the ship channels, harbors, and possible landing points around the 64 miles of Bermuda’s coastline. With a total land mass of about 20 square miles, this means there were 2.5 forts for each square mile.

The book is laid out into different time periods, explaining the types of fortifications built and a detailed explanation of the number, size and location of the cannons and artillery installed at each fort. It’s interesting to see how the amount of artillery decreased over time as the guns became more accurate and more powerful. It was also interesting to learn that although Bermuda was founded by and is an English possession, during World War II, defense of the island was shared by Britain and the United States, with the United States eventually being the only foreign military to have a base there in the early 90s.

Ironically, although Bermuda was used as a seaplane base against German submarines during World War II and as a listening post against Soviet submarines during the Cold War, in the entire 383 years of Bermuda’s fortification history, only two shots “in anger” were ever fired from its guns.

Overall, this was a quick and interesting read. The book is meticulously researched and includes numerous period photos, current photos, maps, and illustrations of what Bermuda’s early fortifications would have looked like. I’d recommend this book to anyone with an interest in the islands of Bermuda and it's history.