De Lorean - Back to the Future Part II 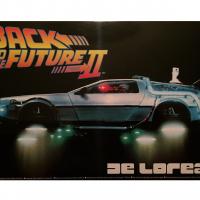 The DeLorean DMC-12 (commonly referred to simply as "the DeLorean", as it was the only model ever produced by the DeLorean company) is a sports car manufactured by John DeLorean's DeLorean Motor Company for the American market from 1981–83. The car features gull-wing doors and an innovative fiberglass chassis and underbody structure, along with a brushed stainless steel body. The car became widely known and iconic for its appearance, modified as a time machine, in the Back to the Future film trilogy.

The kit has 2 dark-gray and 1 black sprues, a body, a chassis, one clear parts tree, a chrome-finished tree for the 4 wheels, 4 soft plastic tires, and a grease tube for the wheel mechanism that transforms the Time Machine from a regular car to a flying car in the movie.

The quality of the sprues is good, there are almost no ejector marks and the flash is almost non-existent. At the top of the body what seemed to be a crack was just a different color in the plastic. After the primer was applied, the crack was gone.

While building the chassis - along with the mechanism that moves the wheels from the normal position to the ‘flying’ position - I had to decide which parts to paint and which parts to leave as bare plastic so the paint wouldn’t interfere with the moving parts. So I left unpainted the inner parts and only painted the visible parts. I also opted to prime and paint the wheels that seemed too chromed and from photos from the movie the wheels had more of a magnesium look to me. So I used Alclad2 magnesium on them.

The interior was very fun to build. The pieces fit very well together. I had to be very careful with the decals and cut them as close as possible to the image itself as they have a lot of carrier film and as the target space is just the size of the image.

I chose to use Alclad2 paints for the body of the car and Tamiya acrylics for the interior and the non-metal finishes. I used a high-gloss black primer from Alclad2 for the body of the car and then painted the whole body in aluminum and magnesium for the front and back embellishments (that is indicated as gray in the instructions). At the end I painted the black sections using Tamiya flat black, masking the rest of the body carefully.

I took a lot of time to build and paint the Time Circuits and all the tubes and nozzles that go at the back of the car. Mostly using Alclad2 aluminum and white aluminum, and steel for the exhausts. This is the only place where I had to use plastic putty to get rid of the seam lines that looked bad if I had left them there.

For most of the final details, I wish they had made the kit with pieces that could be painted separately and then glued together at the end; instead I had to use very small paintbrushes to add the different colors to the same part, which proved to be really difficult.

This is a fun kit to build and the final product looks really nice. I decided to keep the car in the ‘non-flying’ position as I forgot to grease the mechanism before gluing everything together.

I thank Dragon Models/Aoshima for this great kit and IPMS for letting me review it.

About to join halves