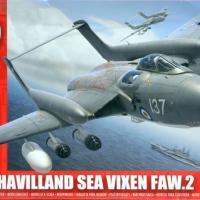 Oh boy- is this great!!! (Stolen from a famous movie.) I have been waiting patiently since Airfix announced the first 1/48 scale styrene kit of the Sea Vixen and the kit delivers in spades. A quick background shows that the De Havilland Sea Vixen entered service in 1959 and served until the 1970's. It was the first British fighter to be designed without guns relying solely on its missiles.

On to the kit- the basics show very crisp molding with engraved panel lines and are molded in light gray styrene. There are three large sprues in total. A very nice clear sprue rounds out the plastic and has the canopies and windscreens as well as the seeker heads, HUD glass, etc. One thing that hits you right off is the instruction manual: detailed and with 20 pages of instructions and 2 pages of common decals. The last thing is an enormous Cartograf decal sheet with tons of stencils (well over 120) and markings for four different planes:

These are listed on separate painting instructions done in full color.

Construction starts with all those things to be fuselage enclosed and that means cockpit, intakes, exhausts, speed brake, arrestor hook and bay and wheel bays. Painting instructions are a little thin but a few posts and a little research and we have a nice looking cockpit. The intakes have a seam and I elected to add intake cover so no issue there. I also chose to have the arrestor hook up and also close the speed brake. Hindsight should have left that open as the fit needs filler to get smooth. Also, if you are going to use any of the four under fuselage pylons, slots need to be opened prior to closing the fuselage so I cut and filed them open.

One thing I decided early on was that I wanted to do this one with the wings folded- I like the look and it saves lots of space! So as the fuselage gets ready to seal, you need to add the two wing folds which fit in place perfectly. A quick note here: If you elect to dot he wings unfolded- Airfix has a GREAT idea and what you do is glue 4 stout box-like structures to the inside of the wings to give a strong join and fit.

When I went to close the fuselage, I ran into my first minor difficulty. The Radar Operator has a clear window on the side of the fuselage. To represent this, you slide the window into the slot and glue it and then close it with a tab in the lower fuselage pushing up to the bottom of the window. It left a gap and with the window close, I masked it and used Elmer's glue and a Q-tip to plug the gap. Worked like a champ. I added the intakes which added well. They didn't completely mate with the intake trunks and other builds I have seen have added some sheet stock- again, intake covers here for me.

I decided to drop the flaps on the fuselage portion and there were some ejector pin marks to get rid of but they easily disappeared with some work. The twin booms and tail were added next. Horizontal stab surfaces as well as all flaps, rudders and ailerons are all separate and can be posed. Fit for the booms was perfect and they aligned with absolute ease.

Both outer wing panels we built with no issue but I did choose to leave the dual pitot tubes off until later (didn't help as I broke them off three times later anyway but hey, it's the thought that counts. Don't forget the slot for the wing pylon before closing up!

I prepped the under wing stores and went with 2 fuel tanks, two Red Top missiles and two rocket pods. Nothing to see here- built up nicely.

On to painting-if I was to do it again, I would leave the pylons off prior to painting- I didn't and spent a good deal of time masking around them. Paint scheme is simple- white bottom and Extra Dark Sea Gray top. I chose the No. 899 NAS scheme- it had a shark’s mouth on the jet and that is the only reason- looked neat! I gloss coated the kit with Alclad clear and waited a day and settled into the decaling. The decals have a flat appearance and sometimes that has caused some issues- not in this case. I had virtually no silvering on first application with the Blue Mircosol first and coating of red Microset second, I few decals took a little coercing but even with the red rectangles, there was no problem. Adding 150 stencils took a while (three long evenings but it makes the plane! I flat coated and was ready for final assembly. The landing gear went on with minimal problems although it took some effort to get the wheels to get on board. The wing fold went very smoothly (after the pitot tubes broke off - the mechanisms are very close to the real thing and even have the jury strut for extra support. It is a bit fiddly once done which is normal for aircraft with their wings folded but not too bad.

Canopy and lights were last and here, Airfix departed the norm- the windscreen is molded normally but the Radar hatch and canopy are separate clear parts with normal gray frames so you have to glue a clear part to the painted frame. Not impossible but a fully clean frame would have been easier for the painting and masking.

To say that I love this kit is an under statement. It was a blast! Go buy one or two or more. Somebody make some more markings especially the Red Bull scheme! Let’s see some aftermarket too! Airfix is back and in a great way. Recommended to absolutely everyone with no reservations. My thanks to Dale Mahoney and Airfix for a truly inspirational release.