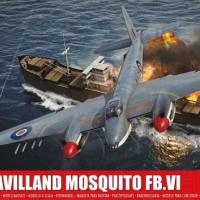 In Part 1 of this review, one of the “come away” conclusions was that this model is massive. Think in terms of a 1/48th B-29 or a C-130. And yet, even a very large model starts out as just a collection of small pieces, with a set of instructions to guide the building through the project. In the case of this Mosquito, there are some 600+ of those pieces and not all of them are small, thus the rather large box in which the kit is presented.

As Part 1 of this review ended, I was about to begin the fun stuff….the gluing, and sanding, and painting, and the last few weeks working on the Mossie have been enjoyable, but not without some challenges. Remembering that this is a kit review and not a “how to build it” article, let’s take a look at some of the properties and characteristics of this product which should catch the builder’s attention.

Let me start out by drawing your attention to the seat harnesses as seen in some of the images associated with this part of the kit review. Those are not items included in the kit. They are home-made. (Disclaimer Done!)

The instruction booklet for this release of the kit is slightly different than the booklet contained in the original release. For starters, the booklet for this release ( 25001a) is noticeably smaller, and, in fact, is about half the size of the first release. The important difference, though, is that the first release (25001) had steps that referred to the nightfighter version and the parts to be used in building that variant. Those parts are not included in the 25001a release, so the modifications to the instruction sheet eliminated those illustrations and steps that are not applicable.

If this is your first “go” at an Airfix kit then it is important to note some features that appear in the instruction booklet. Like most models sold internationally, the assembly process is illustrated by the use of some icons that show which parts are to be fitting without glue, the use of alternative parts, repetition of an assembly sequence in order to make “sets” of objects like bombs and rockets, the need for pre-drilled holes, and the application of decals. The Icon chart is on page 4 of the booklet and illustrates 13 such icons.

Pages 5 through 11 are illustrations of the part trees and will greatly assist you in locating a particular part. It should be noted that not all parts will be used. Jumping to the end of the booklet you find Paint and Decal guides on pages 52, 53, 54, and 55. On Page 55, all of the paints required are identified for you by number. (While you are on page 55, take a look at the seated pilot figure identified as “Pilot (Cockpit). The figure appeared to be the spitting image of Group Captain Lionel Mandrake! Google it if you are under 40 years of age. Note that the color codes are “call-outs” for Humbrol paints. For those who do not use Humbrol, you’ll find the “color chips” printed on within the instruction sheet is very helpful. General reference materials on WWII British aircraft allow me to make quick work translating “Humbrol Paint numbers” into a language my airbrush speaks.

This is a kit review, not a “Build Book”. In some cases, in order to talk about the quality, or lack thereof, of a particular part, or to make you aware of a potential issue, I will cross the line and get into the “Build Book” arena, but I’ll try not to do that too many times.

So, having said that, let’s open the instruction booklet and begin our journey through the assembly process looking for issues of which you should be aware.

Before you pop open the glue and paint, it is highly recommended that you study the sequencing of the build, in its entirety, and in great detail. Failing to do so will cause trouble. You’ll note that, in some cases, it will be advisable to add the decals to a sub-assembly before gluing it into place, and that some painting is best done before/after some sub-assembly, depending on the sub-assembly and where it will be located. Please note that you will definitely see a bias, henceforth, toward the “negative” in this review, but I will also try to balance it with some positive comments about the engineering and design of the kit parts. In short, this model is not a “beginner” kit. Even those with experience will find the assembly process a bit of a challenge, but then that is what comes from a model with thoroughly detailed engines, landing gear, weapons bays, and cockpit.

Before we get into a step-by-step review approach, there are three negatives that can be pointed out from the outset. First, there is a tendency for some of the locating biscuits (those flanges of plastic that are supposed to fit into a groove or opening in the part to which another part is to be joined) to be larger than their respective receiving slots. A quick example which you can test by removing and dry-fitting the parts are the cockpit floor, Part 1E in Step 5 and Part 47E in Step 26, the control column. You’ll notice that the locating biscuit on the control column base either does not fit into the receiving slot on the cockpit floor, or that the fit is rather tight.

This problem will reappear on many of the parts on the Mossie kit. While the Advocates of Absolute Precision may not be pleased, in the end, this is an easy problem to address and does not cause any diminution in my view of the overall quality of the kit. Here is where I cross into the “Build Book” aspect for just a minute……the fix to this problem is to gently enlarge the receiving hole with a # 11 blade, test fit, and then stop enlarging the hole as soon as the biscuit will properly slide into the receiving hole. In the case where the locating device is not a biscuit, but rather a locating pin, and the receiving hole is a small “well”, then open the diameter of the well with a drill bit. The goal is not to drill a deeper hole but only slightly enlarging the diameter of the hole that already exists. You will find that enlarging the locating wells on the wings and fuselage will improve the “fit” of these parts and help to minimize the gap between the parts.

As a matter of routine, open those receiving slots and wells before you begin assembly. You’ll find that doing so as a Standard Operating Procedure will be useful.

This problem is one of the most serious problems I encountered with this kit. I hope I am using the correct term when I identify the problem as EPM. These are the small circles that one sees on many of the parts, some being small, and some being rather large. Let’s use the pilot’s seat, Part # 78L, Step 2, as an example. (There is an image associated with this review) that shows the EPM that appear on this part. Look at that image and you will notice that there are three EPM’s that are visible along the lower portion of the seat back. You’ll also notice a set of scratches in the plastic left behind (and not yet sanded away) when a large EPM was removed from the upper surface of the part. You’ll see some detail molded into the seat back as well. Make sure to leave it in place. The lower EPMs will not be visible when the part is cemented into place but the upper EPM had to be removed as it would be quite visible. This is, in fact, the test that I employed before I bothered to remove an EPM. The test is quite simple.

Unfortuately, EPMs are a fact of life on the Mossie kit, some appearing in some very inconvenient locations and in areas for which accessibility is rather limited. A curved-headed file will be your new best friend.

In the end, not all of the EPMs need to be removed. Most of them will not be visible due to the massive amount of detailed parts that fit inside the bomb bay and gun bays, covering the EPMS. However, clean the gear wheel doors and the bomb bay doors, as well as the cabin entry hatch. Those EPMs are visible and will detract from the finished model if not removed. Test fitting parts and studying the assembly instructions will go a long way in helping to identify which EPM must be removed and which will not be visible.

The third negative issue involves the small locating walls that are molded into the parts in order to guide the location of parts such as the cockpit floor and bulkheads. In some models, the engineering and design would rely on locating pins and wells to facilitate the proper placement and alignment of such parts. Airfix chose to use molded walls. A perfect illustration of this can be seen on page 16 of the instruction booklet, in Step 31 by noticing the locating walls that appear in the shaded area of the interior of the nose. More on this issue after we try to balance the review with some positives.

I’ve laid out some negatives, so now allow me to balance them out with some positives.

Regarding the locating biscuits, I’ve recently built some models on which there are no locating biscuits or pins of any kind. I’d much rather have the very small issue of working on a “fix” in order to improve the fit of a subassembly, than have to perform root-canal on various parts due to no locating aides of any kind. I found that fixing this issue on this Mossie really was not a time killer or a major problem but that it did, at a minimum, need some small level of attention.

The presence of EPM is what I consider to be the major issue of the three problems I’ve addressed. Removing the EPM will be time-consuming, and cleaning up the area where the EPM was removed will require some sanding and polishing. In order to make the build process go a bit more smoothly, employ those two test questions mentioned above. There’s no “upside” ort positive spin I can generate regarding the EPM. Just suck it up, Buttercup, and deal with them.

The locating walls may cause some problems but know that they can also be of great assistance in aligning the interior parts correctly in order to achieve a better fit of the exterior parts such as the engine nacelles, fuselage halves, flap and control surface halves, and the wing halves.

To conclude this rather lengthy part of the review let’s focus on how the locating walls can be used to improve the placement and fit of certain parts. I preface this part of the review by saying that it approaches more “Build Book” content than it does “kit review”, and that I learned this lesson by having already assembled the original release of the kit earlier this year. So, “I’ve been there, learned that.”

Bringing Part 2 of the review to a close, we can summarize by stating that it is important to study the assembly steps to insure proper fit and alignment, remove those EPMs that will be visible upon completion, and take your time. It’s a big kit but proper fit between even the smaller of parts is critical to the quality of the end product.

We will take a look at the engines and other detailed subassemblies in Part 3.