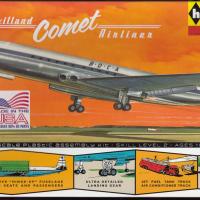 Round 2 Models has certainly come out with some interesting stuff in the last few years, including AMT, MPC, Polar Lights (Aurora), Hawk and Lindberg kits from yesteryear. As IPMS Historian, I also find it gratifying that the models that have disappeared from the shelves have reappeared for the newer modelers to enjoy.

The de Havilland Comet was the first purpose-built jet airliner which first flew in 1949, entering service in 1952. The major overseas airlines of the early fifties were BOAC and Pan Am. BOAC ordered British made Comets, Pan Am bought American made Constellations, DC-4s and then 707s, DC-8s and Convair 880s.

The Comets had only been in service a short time when trouble struck. There were unexplained crashes of Comets. And then there was a crash where the aircraft was recoverable, and the problem came to light. The Comet was the first large pressurized aircraft, and the strain on the fuselage from pressurizing and depressurizing caused fatigue in the outer skin. Because the early Comets had square windows, the corners became the focal points for strain, and cracks would develop, causing catastrophic failure of the fuselage. There were also other issues with general assembly procedures and metallurgy.

The visible fix was actually pretty simple, and can be seen on this model. The windows were redesigned to be oval, with no corners.

The Comet 4 remained in service with British airlines for 30 years. The military successor is the Hawker Siddley Nimrod, which was retired in 2011.

The model is from the original Hawk molds, from 1958. The box art is copied from the original Hawk box top, with some features added at the bottom. There’s not a lot of detail except for the interior of the passenger compartment, which has seats and passengers. And there’s a BIG door which opens to reveal the passenger compartment, a feature not found on the original Comet. Except for the interior, the kit is very basic, with 2 fuselage halves, wings top & bottom, horizontal stabilizers, landing gear (10 wheels, 2 main gear legs, one nose gear leg) and the clear windshield.

You also get three auxiliary vehicles, a bus, a refueling truck and an air conditioning cart. The A/C cart can also be used to hold the tail up if you don’t weight the nose.

I painted the interior nondescript gray (36440 if you MUST know), and the seats pale blue. I assembled the interior and put the seats in, then put it in the right fuselage half. Just following instructions, I used a lump of modeling clay with some birdshot as a nose weight. I then added the large door on the left side and put the left fuselage half on. I glued the wings to the fuselage.

At this point I cleaned up the seams on the fuselage top and bottom. The positioning of the engines pretty much covered up the wing root seams, so I left them alone. At this point I was about ready to begin painting.

I looked at the decals and decided that I would have big problems with those stripes that ran down the fuselage sides, continuous from the cockpit to the tail. So I decided to paint a very dark blue stripe over the windows to replace the center part of that decal. I put a piece of paper towel inside the windows and across the seats to keep the spray from changing my color scheme inside. I closed the door and painted the center section of the fuselage 15050 dark blue, which matched the stripe pretty closely. Then I put a long strip of Tamiya 6mm tape over the windows, aligning the top of the tape with just above the tops of the windows. The tape was a little wider than the stripe I wanted, but that was OK. I painted the top of the fuselage gloss white. Then I removed the tape from the blue area and replaced it so it barely covered the bottom of the windows, making the stripe the same width as the decal.

Unfortunately, at this point I moved the large door, and the hinge caught. It split the top of the fuselage, front and rear. I redid the seams and repainted the top gloss white.

I put a coat of Future on the entire plane. I also glued on the horizontal stabilizers at this point.

A warning here. The instructions show installing the clear windscreen after decals. Won’t work. The decals have the windows on them.

The decals were what we’ve come to expect from waterslide transfers in the 21st Century. But there was a problem. The box art shows the airline name as BOCA. Seems there were some licensing concerns about using the airline name.

The stripes were surprisingly easy, but then they only went from the nose to the blue stripe at the windows, then continued again from behind the windows to the tail. The BOCA/BOAC problem was easily fixed with a pair of decal scissors. I cut the A and C separately and put them in BOAC order. The only other decals were on the horizontal stabilizer. Purists may want to change the registration, as G-ALNA was a Schweizer glider, not a Comet.

After the decals had set, I put another coat of Future on, then assembled and installed the landing gear and the gear doors. I had to do a little scraping on the main gear legs to get them into the holes, but after 57 years those holes have probably picked up a little flash. I had assembled the bus, truck and A/C van, but didn’t paint them. I also didn’t do any passengers because my figure painting skills do NOT extend to 1/144 people.

One really neat feature in this kit is that there’s a cardboard insert in the box. It may be there to separate the sprues, but it’s printed like the end of a commercial runway and makes a SUPER display base.

Recommended. This was a trip down memory lane, although when this kit came out, I was in 6th grade and couldn’t afford the 2 bucks for a kit this big. Except for my problem with popping those seams, the build went pretty well. Fit is quite good for a “flashy fifties” kit, and it makes a great conversation piece. The display base is also a nice additional to the aircraft. It’s also is cool that the upcoming local chapter contest is for “vintage kits”. Yep, this one fits nicely.

Many thanks to Round 2 for the review kit and the trip back to my youth. And thanks to IPMS USA for the chance to do this review.

Beauty Shot on Base

Beauty Shot on Base
Previous Next