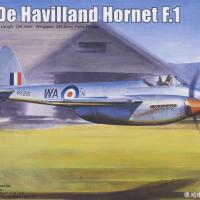 Trumpeter from China has released the first of a series of boxings for the deHavilland Hornet. This boxing represents the Mk.1F, with two other boxings scheduled for release later this year.

Upon opening the box you find 7 sprues (one clear) with about 80 parts in sharp and flash free plastic. Also a decal sheet for two finishing options - both overall silver - is provided.

I have read in British websites that there are some shape issues around the nose, the fuselage length and with panel lines that should not be there. I am not an expert on the Hornet, so I cannot speak to that. Please do your own research on the accuracy component of this model.

Assembly of this model is very straight forward, with solid engineering in mind. As usual you start with the cockpit, which comprises of about 10 parts. I am not sure if the color guide is correct for interior colors of post-WWII British airplanes. Again I will recommend you to do own research. Then you assemble the landing gear nacelles, which have some molded structure which takes nicely on some wash and detail painting. From there you move to the wings and tail structure. Again no surprises and everything fit as supposed to, as long as you make sure to clean up the parts from sprue gates.

The wings offer the only option of this kit: open or closed flaps. Some nice detail is provided in the flap bay but the pictures I’ve found online show the flaps in closed configuration, so I choose to close mines.

I like to explore the sprues/decal sheets and see what other versions can be assembled “out of the box”. This boxing includes parts for the Mk.3F and Mk.21NF, but not all the parts needed to build either “out of the box”. However the tail number “PX 216” provided as part of the decal sheet was originally a PR.2 –photo recon- rather than an Mk.1F (Fighter).

The conversion is very simple: just putty and sand the cannon tray and then add two camera lenses –represented by decals- to the lower fuselage. Most camera lenses will have a shutter, so a black decal will represent the closed shutter configuration most likely to be found when the airplane is in the ground. I don’t know if the PR.2 had shutters, I am making that assumption.

All the decals used -with exception of the tail number- were from my spare boxes and some of them were very old. The only decal I used (again tail number) behaved nicely and required no setting solution. This airplane saw a very limited service life as a PR.2, so weathering was kept to a minimum.

This model assembles easily and looks nice in my shelf. The low part number means it is appropriate for a beginner modeler or for a chance of pace from more elaborated models. I took about 12 relaxing hours to get this model finished and that included the time needed for the conversion and hunting for the decals.

Based on the easy of assemble and the “fun factor” I will highly recommend this kit. If you are a purist on the Hornet, you might want to do some extra research as to what it takes to correct the shape issues.

I would like to thank Trumpeter, Squadron and IPMS/USA for the review sample.