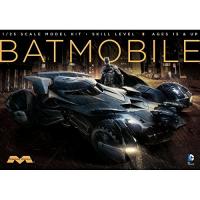 There have been many incarnations of the Batmobile from the 1940’s until the latest entry, the Dawn of Justice Batmobile. All of them are cool but this latest is sleeker, armed to the teeth and looks the part. Moebius has replicated this with this kit so let’s jump in and get it built.

Looking through the instructions (gasp!), there are four major parts to the assembly- the chassis and wheels, the upper body, the cockpit and the spoilers/wings.

Starting with the bottom, the motor and transmission housing are built and require a little putty. Make sure the seams are good on the transmission as once built, it is very visible. The rest of the suspension and side build really well and fit great. The two inner panels (parts 17 & 18) are painted black with silver details so these were left off until later. Since the fenders wrap around the wheels, they were partially assembled and set aside for paint later. The inner fenders and drive housings were added to the chassis also. The parts were set aside and construction resumed on the interior (cockpit)

The cockpit is nicely appointed with a full dash, seats and steering wheel. There is an aftermarket set for those that want to upgrade more but I wanted the interior closed so I did not purchase and add these.

The upper body was built next and starts with building and adding the front wing. The nose guns were also built. The cockpit was added and a few seams were around the rear area which made things nice and smooth. I then glued the canopy assembly on to the car also after adding the glass and masking. Parts 17 & 18 were added to the chassis at this point also.

I did screw up here. I added the wing support assembly later which is wrong. Add it before you glue down the interior assembly. In other words, follow the instructions. I built the spoilers and the wing support. Take your time and get the alignment right.

Once the construction was done, I primed and fixed a few spots and set up to paint the kit. The color called for in dark gunmetal. I used Vallejo Metal Cote gun metal which is an awesome paint. You mist it on slowly and build it up. Once it dries overnight, it’s tough as nails. The chassis, sides and tops were all sprayed this color. All of the fenders were done this way along with the wings and spoilers. While this dried, the wheel hubs, wing support and front wing were all painted black. Parts of the wing support were also painted silver.

The only difficult part of the build was adding the complicated rear wing support to the car and getting all five supports per wing to settle into position. After some patience and thought, they dropped into place. The wheels were added and the fenders assembled around them. After the obligatory touch up or two, the car was given a semi gloss finish and the tail and headlights picked out, the masks removed and it’s done.

This is great looking car when finished and large. Fit was great. I will say to follow the instructions and you will make adding the rear wings easier. Recommended to all fans of the Dark Knight.

My thanks to all the great people at Moebius for the opportunity to review the kit.