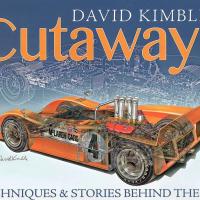 This is a beautiful book with very nice illustrations of David Kimble’s cutaways, step-by-step descriptions on how the cutaways are made, and descriptions of the engineering of the vehicles.

David Kimble is in engineer turned illustrator who grew up in Southern California racing, and eventually became known for his cutaway automotive illustrations. In the introduction Kimble states that the purpose of this book is to answer the question “how do you do it”, to which he usually responds “a little at a time”. This book for the first time describes his approach to illustration and the techniques on how his work is done, plus some of the stories behind the illustrations.

Chapter 1, It All Starts With A Drawing, shows how Kimble uses a pencil and pen drawing as the base for his illustrations. Using a McLaren M8A CanAm car as an example, he shows how the drawing is built up of many layers on clear film or vellum. His drawings are created with conventional drawing tools without the aid of computers, and his engineering background helps in illustrating the technical aspects of the cars.

Chapter 2, From Ink To Airbrush, illustrates how Kimble applies color to the backside of the drawings using an airbrush and Windsor & Newton Designers Gouache, a semi-opaque watercolor. Step-by-step illustrations show how he uses varying shades of colors and transparency to create the cutaway effect to show the underlying components. The illustrations themselves are beautiful, and the artistic process would be interesting both for graphic artists, car modelers, and anyone interested in airbrush techniques.

Another series of step-by-step illustrations is used in chapter 3 to show how a cutaway of a 1949 Harley Davidson HydraGlide was completed. Chapter 4 is 39 pages of engine and transmission cutaways Kimble has made during his career. His engineering background and artistic abilities create some stunningly realistic cutaways of engines and transmissions that were produced both for car magazines and automobile manufacturers.

Chapter 4, Cars From The Golden Age Of Classics, highlights cutaways done by Campbell in the 1980s of several classic cars. Beginning with a 1939 Duesenberg Indy car, other cars include a 1931 Cadillac model J Duesenberg, a 1936 Mercedes Benz, and an Auburn Cabin Speedster.

Kimble illustrates foreign cars in chapter 6, Traveling The World To Illustrate Cutaway Cars. Cars include a Renault Alpine, 1983 Nissan 300ZX, Porsche 911 Turbo, and Ferrari Testarossa & F40. Each of the cars includes a description of how he researched the cars and a description of the car itself. Each car is accompanying by preliminary line drawings in addition to the finish cutaways.

Chapter 7 is The Corvette Years, which includes 30 pages of Corvette cutaways for the fourth, fifth, sixth, and seventh generation Corvettes. Cutaways of Corvettes C5R and C6R racecars are also illustrated. The C5 and C6 Corvettes are shown in triple layer cutaways of powertrain, unibody frame, and body. The chapter also includes a 427 cobra and 1992 Viper RT/10 racecar. Descriptions of the process to make the paintings, preliminary line drawings, and detailed description of the cars are again included. The book is not just about the illustrations but includes nice descriptions of the car’s engineering also. This chapter alone makes the book valuable for Corvette fans.

But Wait, There's More, is the last chapter, illustrating cutaways of NASCAR race cars from 1982 through 2001, A GM EV1 electric car, a 2013 Viper and wraps up with a steam locomotive cutaway.

The appendix lists the cutaways Campbell has done by year and the index includes keywords used in the book.