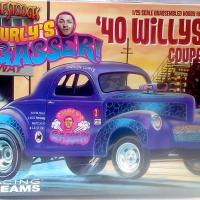 This proved to be a fabulous kit with both the tilt front end 1940 Willys Coupe as the subject matter, and the nostalgia provided with arguably the most beloved and popular individual of The Three Stooges, Curly Howard, as the backdrop. I was so impreesed with the car itself. It went together so seamless, without any fitting problems whatsoever. This particular Willys Coupe can only be built the way it is depicted on the box top artwork.

It's power plant is a fully blown, fuel injected drag motor, complete with chrome headers to top it off. The motor is loaded with chrome parts that are well molded and full of detail. To view this motor in it's full glory this radical Willys is accompanied with a tilt front end . The "gasser" also has a straight axle, so famous for this classic dragster. It also comes with two full sets of wheels. I used the vintage mag wheels as they label them on the box. But another set of great looking slotted dish mags also come included in this kit. The rear tires are slicks that are emblazoned with a pre-lettered sponsor of the "Wiseguy Rubber Co." to invoke more of the comedy trio's magic (in this case Curly Howard). The slicks are also given a thin purple stripe treatment to go with the unique lettering. There is also a nice set of vintage traction bars that really set the car period straight . Although I didn't use them, the decals are nice as well, with the cartoon Curly for the door and blue bubbled pieces to adorn the fenders and hood on the body .

The body is molded in purple. The body from the front of the doors back is separate fron the solid nose piece. I primered both body pieces with a thin starter/primer coat of silver. I then painted the body a Testors Icy Blue Mettalic . The paint job worked just as I'd envisioned and hoped it would. The bright blue came out to a very smooth, soft finish look. As far as the interior goes, it is the basic fare with the minimal attention given to a race car of the day. I gave the interior a matte black finish. The steering wheel comes in chrome to add color to the simple style of interior. You receive two sets of front, back, and side windows. One set comes in clear and the other is in yellow. I chose to utilize the yellow just for a different, albeit slightly different effect, only because most other models come with the standard clear window fare.

I really appreciated the folks at Round 2 , as well as the people at IPMS for giving me the opportunity to review this classic and nostalgic kit. I loved every bit of it. As stated before, the kit went together without any hiccups. And, oh yeah, it even came with something I have never dreamed of getting in a model kit, A CURLY'S WHOOPIE CUSHION!!! My 3 year old grandson loved that. He played with it off and on as I spent time assembling the car. Again thanks, it sooy-ten-ly was fun !!!