Cruisers of the III Reich. Vol. 1 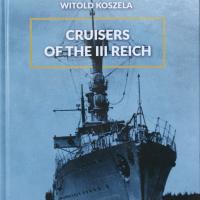 The author, Wikold Koszela, has written 24 books on warships, mostly British, United States and German battleships and modern Polish and Soviet Navy warships. Twelve of his publications are in the Kagero Top Drawing series. For this and other books, Witold also supplied the line and color drawings, and they are top quality and very helpful for modelers. I could not find additional information on Witold.

Casemate Publishing is offering the latest Maritime Series installment from the Polish publisher Stratus. You get a hardbound book, 11.875 X 8.5 inches, 144 pages. CIIIR is loaded with photographs (149 B&W of course), along with one map, 10 tables and 23 line drawings. The last five pages of the book have eight color plates, showing each ship. Volume 1 covers the first five cruisers of the WW2 German Navy with an Introductory Chapter on the evolution of German cruisers from 1900 to 1935, with focus on the Reichsmarine period (after World War One to 1935). The five cruisers in Vol.1 were built during the Reichsmarine period (pre-1935). Afterwards, the German Navy was named the Kriegsmarine, and the additional cruisers built then are covered in Volume 2.

The light cruisers Emden (1925 version), Konigsberg, Karlsruhe, Koln and Leipzig are each covered in the remaining chapters. They represent the first major warships built by Germany since WW1. The chapters give a thorough chronological history of each ship, including detailed operational data. All the commanders are listed, and tables give the characteristics in metric units. Modifications and repairs are discussed. Line drawings show the ships at different stages of their career. The text has interesting phrasing and wording, but most of all, a wry wit that helps keep the reader wanting more.

Taken together, these five cruisers played minor roles in WW2 as they were too small to modify effectively for the demands of war conditions. Emden 1925 was simply a late WW1 cruiser, obsolete before built, and the K class, even with some innovative tweaks (such as offset rear main turrets) was obsolete before WW2 started. Leipzig was an incremental upgrade, but was unlucky. The Norwegian Campaign in 1940 was their high point but also their Waterloo as two were lost. They were not highly modified. Afterwards, they hung around Norway as a defensive posture or became training ships. They did help evacuate troops and bombard Russian troop positions in East Prussia late in the war. Their strengths and weaknesses were highlighted fairly.This book is an excellent resource for modelers and curious historians. Models of these ships are few. Kobo-Hiryu put out basic resin kits of the Karlsruhe and Koln years ago, but may be hard to find. WSW Modelblau (formerly Doc Models) had a Karlsruhe resin kit, and is also hard to find. Naval Works had a Koln resin kit, and is also hard to find. Samek/ROP o.s. had a 1/700 resin kit of the Konigsberg (70009). H-P Models has 1/700 basic resin kits of each of these five ships, and Flyhawk Models recently put out brilliant 1/700 injected plastic kits (+/- PE and brass) of Konigsberg with fantastic detail and accuracy (double-checked by this book’s numerous photographs and line drawings). Flyhawk also carries several generic PE sets and brass barrels for WW2 German warships and a deck paint mask for Konigsberg (which presumably would work for making a Koln or Karlsruhe).

There have been books in German language on the K-class (Koop 1994) and Leipzig/Nurnberg (Breyer 1994) light cruisers but these are hard to find, and 50-page paperbacks. Thus, Cruisers of the III Reich is the ultimate resource for information on Emden and K-class light cruisers.

The price is rather high, but for these five ships, there is little factual data on their history, modifications and appearances, so any modeler of these ships would get worthwhile value from this book. The rare photographs and excellent line drawings and color plates are well done and useful for modelers. Historians have plenty to learn and mull over from the extensive narratives on each ship. The birth of the Reichsmarine and Kriegsmarine is seldom described, filling a gap in knowledge of the German navy in WW2. Recommended for serious WW2 naval history buffs, ship modelers of Kriegsmarine cruisers, or anyone else wanting a behind-the-scenes look into what it was like to be in the German Navy during WW2. Volume 2 is much anticipated.

Thanks to IPMSUSA for the privilege of reviewing this superb reference!