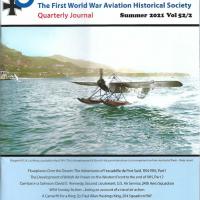 The Summer 2021 journal of Cross & Cockade International features a nice sharp colorized photograph of a Nieuport VIH, N.3, at Monaco in April 1914. The rear cover displays three black and white photographs of Bentley Camels of 204 Squadron, immediately after the end of the war. You can see that all three are fitted with bomb carriers. The center section, The Gazetteer, consists of seven black and white photos, and thirteen black and white maps. Also included is a separate folded color 1/100,000 map consisting of eight pages when folded up.

Ian Burns kicks off this issue with a 31-page tale of French Nieuport IV floatplanes based in Port-Said, defending the Suez Canal. Part one of this story includes 57 black and white photos, two black and white detail drawings, and three maps. Page 52.088 (below) shows off a very clear photograph of a Nieuport IV being hoisted onto HMS Doris (pictured at the bottom right of the page). There are several first person accounts that really add to the narrative. Although these are all British Nieuports, there are plenty of detailed shots to get me to pull down the 1/48 resin Nieuport IV that has been waiting for me to build in Swedish markings. Next up is Part 2 of a dissertation from David Spruce of the University of Wolverhampton’s War Studies Department. The author continues to analyze the Development of British Air Power on the Western Front to the end of 1915 for eight pages. Included are five black and white photographs, two of which show off a Renault engined Be2c with an interesting camouflage.

David Isby presents an American’s perspective in Combat in a Salmson. This short article include the contents of two letters that David S. Kennedy sent home to his older sister in Virginia. David Kennedy survived the war and was able to continue his career as a journalist in New York City after the war. Page 52.117 displays a Salmson 2A2 of the 240th Aero Squadron. Next up is Mike Ingham’s article on the first sinking at sea of a submarine by direct air action (without the assistance of naval vessels). This attack resulted in all hands lost on the German U-66 from a Curtiss H.12 (8656). Five black and white photographs are included in this four page article. Page 52.119 shows off a nice side view of 8656 at Tresco, nicely displaying its bombs.

The late Stewart K. Taylor provides a biography of Canadian 2nd Lieutenant Paul Allan Hastings King 204 Squadron RAF. This eight page article includes 17 black and white photographs. One of these photographs features the Sopwith Camel E4395 that sports a rather colorful fuselage. You can spy the name of his future wife on the port fuselage: “Betty”. Peter Smith delivers an article on Port Meadow aerodrome, a training base close to where Peter Smith lives. This three page tale includes seven photographs, one of them being a magnetometry scan of the site.

Paul R. Hare enlightens us with F.E. Gets a Gun. Some of the rumors concerning the origins of the F.E. 2 are cleared up along with its initial flights. Testing included water operations as well as normal grass operations. Page 52.137 depicts the Maxim machine gun that was mounted on the nose. The photograph on the bottom of the page depicts a 1913 aircraft designated as F.E.2, however, this airframe was a totally new design that differed substantially from the early 1911 design. This airframe would be the prototype for the F.E.2a, b, and d variants to come. Regular contributor, A.D. Harvey, contributes a three page article on Close Support Aviation in World War 1. There is only a single photograph of a Sopwith Salamander, but it’s a good one displaying a disruptive camouflage scheme.

Joe Moran highlights market news and Bob Gladding provides a build review of the Joystick Models vacuform 1/72 Albatros C.III while Joe Moran builds up KP’s 2019 injected plastic release of the 1/72 Albatros C.III featuring a winged dragon on the starboard side of the fuselage. The Bookshelf section is a review of WWI aviation specific books and magazines with this issue totaling nine.

This is another excellent issue from Cross & Cockade and I am always impressed with the quality of the articles, both from a research perspective, and readability. The period pictures, maps, and drawings in this journal come off looking great thanks to their printing on the journal's glossy paper. If you are into early / WWI aviation; this journal is an incredible source of information that will have you on the edge of your seat waiting for the next issue. My thanks to Cross & Cockade International and IPMS/USA for the chance to review this great issue.