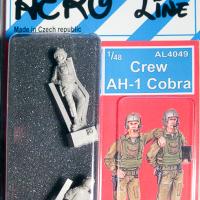 Finally, somebody has made figures for the helicopter models in 1/48 scale. Aero Line’s latest release is marketed as a Cobra crew. As far as I know there have been no previous US Army helicopter pilots available in this scale.

Packaged in a vacuformed shell, Aero Line has created two beautifully cast figures molded in light gray resin. The instructions are on the back of the insert card. There is no actual color callout, just the color profiles. The instructions show the flight suits in a Vietnam-era olive green like the two-piece flight suit of the time; however, with the way the figures are molded, you could easily modify them by removing the upper pants pockets and painting the flight suit in the sage green color of the one-piece and no one would be the wiser.

Inside the package there are two figures consisting of three parts. The two pilots have minimal pour blocks and mold aids up the side. They required minimal cleanup. My example had just the tiniest bubble on one finger that was easily filled with paint. One pilot is molded as a one piece affair. He is standing upright with his hand behind his back with a logbook or map in this left hand. The other pilot has a separate arm that can be posed on the other pilot’s shoulder or against the helicopter while his other arm is on his holster/pistol belt.

These figures are really well detailed. They both have body armor around their flight suits. Both figures have SPH-4 type helmets on their heads, complete with chin strap and mic boom. They have a .45 mounted on their web gear. If I had to find anything wrong with these figures, the commo chord is molded with a twist. US Army chords are not curled. These figures are perfect for 1/48 scale US Army helicopter models.

The construction was straightforward, simply having to add the one pilot’s arm. The fit was perfect. Then it was just a matter of painting them. I used Humbrol 61 for the flesh portion. Model Master FS34087 Olive Drab is a perfect match for the two-piece flight suit. I even broke out my old one to verify the color. Yup, perfect. Since I modified one figure slightly to a one piece flight suit, I painted that one Humbrol 78 Sage Green. The chicken plate (sorry, armor plate), was painted Gunze H340 Field Green. The web belts were done in Tamiya XF-58 Olive Green. Finally, the helmets were painted in Tamiya XF-49 Khaki. The typical figure painting techniques were used to bring out the highlights and emphasize the shadows. I was very happy with the end results. I purposely did not add the Big Red 1 to the shoulder patch, as I wanted to use these figures with a variety of helicopters. I would have preferred not to have a raised portion for the patch. However, it can easily be taken care of with a quick sanding or carving, so no big deal.

It’s certainly time that we have some figures in 1/48 scale for US Army helicopters. Even better, Aero Line’s figures are superbly molded with great detail. The one and two piece molding made clean up a breeze. Painting was per the instructions. I did modify one figure to show that it could be done, but even if you don’t modify them they are impressive and a requirement for 1/48 scale helicopter modelers. In addition, they have recently released a UH-1 crew set that I hope to get shortly. This is the beginning of a great line of 1/48 scale HELICOPTER pilots. Buy them and add them to your kit. You can see how good they look next to my Monogram AH-1F! Now, how about a figure with a Stetson?

Thanks to Plus Model and IPMS/USA for the review copy.

Pilots with AH-1G - Right Side

Pilots with AH-1G - Right Side Profile