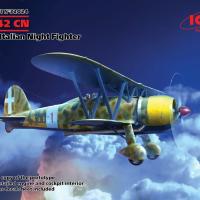 Fiat’s CR.42 Falco was one of the last biplanes to serve in an air force at the beginning of World War 2, and as such was essentially obsolete from the moment of its activation. Nonetheless, it served with some distinction in the early air battles both during the Battle of Britain and in the Libyan desert campaign before being relegated to second tier operations. In this instance, serving as both a night fighter and intruder kept this elegant fighter flying long after it would otherwise have been scrapped. Both the Italians and Germans used it in these roles, and ICM’s latest version of this aircraft presents the Italian make. Two different muffler system extensions are offered, as well as a couple of unusual underwing search lights, angled to shine sideways (presumably so as not to interfere with the pilot’s night vision). In addition, the kit still has a couple of bomb rack assemblies, although these are not intended to be used. As always, the kit provides separate flying surfaces and tail wheel, permitting casual posing of the finished model.

Like previous releases, this ICM kit features a lovely, well-detailed interior which accurately portrays the aluminum strut assembly of the original, and adds the same instrument-by-instrument decals for the split control panel for those who don’t enjoy this kind of hand painting. Typically, no seat belts are provided, which will either have to be located from an aftermarket item or scratchbuilt. Alternatively, you can add one of the new ICM seated Axis pilot figures to fill out the cockpit.

The engine is an impressive subassembly in its own right, with separate cylinder heads for any maintenance panels you may choose to leave open. They even offer difference oil cooler parts to accommodate the maintenance panels, so there’s no scratchbuilding necessary no matter what option you choose. Another feature isa choice of open or closed cooling flaps, which is a nice touch. The only think you’ll want to add to the engine might be the plug harness, which you can easily create from either lead or regular wire. If you are assembling this model with all closed maintenance hatches, you’ll probably find that a small amount of putty is required to make everything appropriately seamless.

In assembling the fuselage, a small amount of filler will be useful in the usual places, but the fit is really exceptional overall. In fact, in creating the subassemblies for airbrushing I’ve found that one can assemble the top wing with all the struts (which are typically painted the same as the underside) by installing them from the center out to the wingtips, gluing each only onto the top wing. If care is taken and the glue allowed to set, you can paint this as a subassembly and the wing struts will then almost literally snap into position when complete. I did something similar with the large wheel spats, as these were also typically painted like the top side, although you’ll definitely want to scrape the paint off the matching surfaces when you mate them to the underwing.

In finishing the kit off, four decal options are provided – two for quickly modified day fighters, and two dedicated night fighters in overall black. I opted to make a slightly modified day fighter option, using mostly decals from the kit. As always, the decals are exceptional, and lay very well with little to no silvering. The end result shows the quality.

This makes the third CR.42 that I’ve made from ICM kits, and it only leaves me hungering for more. There really are no down sides to these kits, and despite their detail, are as easy to throw together as any large-scale aircraft models I’ve made. They really do find a nice balance between level of detail and ease of assembly.

As with all of the kits in this range, I can recommend this model without reservation for anyone who likes things a bit off the beaten track. ICM continues to release models that I’ve been waiting literally a lifetime to see, and this is one of their best. Thanks to ICM for coming up with these beauties, and to IPMS/USA for a chance to add this one to my growing stable. Stay safe, everyone, and happy modeling!