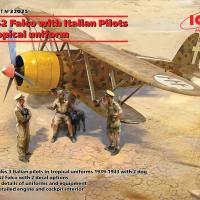 The CR. 42 Falco was one of the last operational biplanes of World War II, as well as being (at least in my view) one of the most elegant aircraft of the period. In the Libyan and Malta campaigns, it battled against the equally obsolete Gloster Gladiator until more modern aircraft made the scene on both sides. It soldiered on for some time thereafter as both an ad-hoc night fighter and intruder for both the Italian and German air forces. The last of the breed served as trainers for the Italian Co-Belligerent Air Force. Rugged and reliable, it was a remarkably agile aircraft, which gave it the vital edge in more than one aerial encounter.

ICM’s fourth incarnation of the craft comes in yet another combo set, which includes their freshly-minted Italian Pilots in Tropical Uniform. This is the pure fighter version of the aircraft, although a set of light bombs and racks is also included, although these are not used, as well as the two different half-spat landing gear options. Two decal options are provided. As before, the kit features a well-appointed interior which faithfully reproduces the aluminum tubing framework of the original, with the only missing item being seat belts. Separate decals are provided for all instruments. The engine is a small model in itself, with options provided to display the engine sans maintenance panels or with the cowling intact. A wire harness is all that is needed to finish this item off effectively.

As with most recent ICM aircraft kits, a good fit means relatively little filler will be needed to smooth things down, mostly along the fuselage spine and tail planes. All control surfaces are separate, which permits a more candid appearance for the final model.

Construction is trouble-free and painting is helped if you change the assembly sequence a bit and glue all of the struts to the top wing only. Since the struts are inevitably painted the same color as the underside, you can paint the upper wing in its entirety and then literally “snap” the struts into position on the finished fuselage. As always, I still think ICM is missing an opportunity by not offering additional decal options, as these are the same decals provided in the initial release of this fighter. That being said, those provided really are of superior quality with very sharp colors, and they lay down with little to no silvering.

The figures supplied come from the new Italian Pilots in Tropical Uniform set, which is comprised of either three figures, four figures, or four and a half figures, depending on how you define the dog and its pup, which come with the set. As with most of ICM’s later pilot sets, these figures comprised a diorama in and of themselves, with two pilots standing listening to a pilot seated on a Falco landing gear spat describing his latest aerial encounter. One of the standing pilots holds a puppy dog while the seated figure strokes its mother. The other standing figure leans on either a propeller blade or wing strut. All are wearing fairly casual clothing along with sandals. All faces are distinctive and definitely individual.

Assembly is pretty straight-forward, with only a bit of adjustment needed for the arms holding the pup as well as the one stroking the dog. Some filler is needed to fill out the seams on the dog and a bit around the stroking arm as well. Otherwise, little prep is required. The goggle strap on the seated figure’s helmet was rather poorly defined, so I replaced it with one made from flattened lead wire.

A quick note for dog lovers: I spent some time trying to figure out the breed shown in this kit, and finally located it. As molded, this is a Neopolitan Mastiff, an Italian breed dating back to Roman times. Apparently this breed was facing extinction by the end of World War 2 and was only resurrected by a single dog lover who started his own kennel specializing in this unusual mastiff.

Painting is very straight-forward and the end result is certainly pleasing to the eye. However, don’t expect much help from the very poor painting directions for these figures or even the box art. The instructions are vague to the point of uselessness, and the box art shows them wearing boots. In actuality, all three figures appear to be wearing socks under sandals – a look dating back to the Centurions of ages past. In any case, you can easily find useful information online for the uniforms. As with other recent ICM pilot sets, these figures are actually closer to 1/35th scale than 1/32nd, being distinctly smaller than earlier releases. However, this doesn’t detract from the look and they certainly don’t appear out of place hanging around 1/32nd scale aircraft.

All in all, this is a terrific set, with one my all-time favorite aircraft paired with an appealing little vignette. They are excellent value for the money, and are basically a diorama in a box. Highly recommended.

As always, my thanks to ICM for releasing such wonderful stuff, and to IPMS/USA for a chance to add these beauties to my growing collection. Stay safe, everyone, and happy modeling!