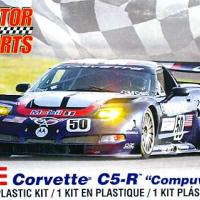 2003 marked the 50th anniversary of the Corvette. It also was the first challenge to Corvette Racing's two years of dominance in their class. Prodrive chose to enter their Ferraris in the full ALMS season as well and, although they were not strong early in the season, they managed to win the last four events of the season, including Petit Le Mans. Corvette Racing was, however, able to secure their third championship by a mere four points over the Prodrive team. The Ferraris would strike another blow, though, as they managed to end Corvette Racing's Le Mans streak, an event in which Corvette Racing celebrated the 50th anniversary of the Corvette.

This kit is a nice representation of the above mentioned car. I really like this kit as a whole; it’s fun to build and it looks like the C5R that raced at Lemans in 2003. But, like most racing cars, there are quite a few different configurations from race to race, so builder beware if you are looking for a super-accurate model. This happens to be the case with this model. Since it appears to be based on the same body as the second Revell release representing the 2001 GM Goodwrench 24 Hours of Daytona C5R, all of the aero, ducts, vents, and access panel changes were not made to this kit. There are a few transkits out there you could purchase to get this model more in line with the car that campaigned in the 2003 24 Hour of Lemans. This kit does include the correct OZ wheels, though.

I built this kit as an out of box build for this review, with the exception of adding Goodyear decals to the tires, front fenders, and front fascia. I also used red seatbelt decals to help the otherwise dark gray interior stand out a little. The instructions say to paint the belts black but, according to the photo references from that race, they should be red (Willans) belts. I thought most Willans belts were blue, but I guess not. Most of the color references in the instructions were fine. Most of the chassis/interior parts were some shade of black/dark gray. My thought was this kit would be really nice super-detailed. But I needed to show restraint and get this review out in a timely manner.

I didn’t have any really huge issues with this kit except for my usual pet peeve: the ride height needs to be low to look right, so I did adjust the front suspension accordingly. I should probably have sanded the side window fastener detail off the body prior to painting because side windows were not included in this kit; only a small “A” pillar window was used for the Lemans configuration. The built-up photo on the box shows the radiator shroud was not installed, but the shroud was shown in the instructions. It makes me wonder if they knew something I didn’t as far as accuracy or fit. Decals were very nice, including numerous carbon fiber panels for the interior, engine, and rear diffuser (note: it’s easier to sand off the instrument panel details before applying instrument panel decals).

As far as body color is concerned, Revell says to paint it dark blue. Supposedly, Lemans blue was the color they used to paint the street and race version for the 50th anniversary Corvettes. Zero Paints make the color and it is available online. I just used what I had, which was accomplished by first spraying Tamiya TS 53, then misting TS 51 over it. I topped off with a coat of 2-part urethane clear. The color looks close to me. I’m not sure what I think of the lift-off body, though. If I was building this kit as a shelf model rather than a review, I would build it curbside and save the engine for the spares box. I don’t really like the look of a fully assembled body sitting next to the chassis for display purposes. I do appreciate the fact that everything is there just in case you feel like hacking up the body a little to open the cowling and expose the engine and chassis detail.

I really appreciate Revell for still releasing a few racecar models, especially with all the legality hassles they must go through to obtain licensing. Thanks to them and to IPMS/USA for giving me the chance to review this great little kit.