Colors & Markings of the F9F Cougar in U. S. Navy and Marine Corps Service 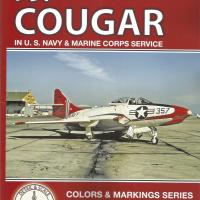 When visiting the D&S website, note that when the page opens it will feature a series of publications labeled, “Detail & Scale Series”. To find the publication being reviewed here, scroll down to find the “Colors & Markings Series” in which this publication is listed.

Bert Kinzey is well known as the creator/author of the Detail & Scale series of publications. These publications, as noted in Kinzey’s bio on page 121 of the F9F Cougar publication focused on the details of aircraft featured in the D&S series. Those details included “the cockpit, weapon systems, radars and avionics systems, differences between variants, airframe design and much more.” (D&S F9F Cougar, Page 121).

The “Detail & Scale Series” was a major success, and as Bert’s bio states, he resigned his position from the Department of Defense and soon began to write and produce books full time. Shortly, publications featuring aircraft carriers were added to the D & S series, and a second series was added as well, the F9F publication included in the new series labeled, “Colors & Markings”.

Rock Roszak, a friend and colleague of Bert’s has a multi-decade history as a digital artist, illustrating several books authored by Kinzey. “In 2017, Rock’s role at D & S expanded when he authored one book and co-authored another. He is responsible for converting the existing digital Detail & Scale Series books to the new print format.” (D&S F9F Cougar, Page 121).

The partnership between Kinzey and Roszak has resulted in this excellent publication featuring the colors and markings of the F9F in US Navy and Marine Corps service.

Background for this Publication

In 1983, “F9F Cougar in Detail & Scale” was the sixteenth book in the original D & S series. In 2004 the series was discontinued but was “reborn” in 2014 in digital format. A much larger “F9F Cougar in Detail & Scale” was released as a digital publication. The intent was to continue offering books in the D & S series as digital versions. Responding to a continued request for D&S books in the traditional, printed format, and freed from restrictions upon that format by shear size, color usage, and the development of print-on-demand capabilities, Detail & Scale, once again, became available in a printed format.

The publication is of a weight and size that results in a “comfortable read”, meaning that the book’s size and weight result in a comfortable “hold and read” attitude. The print is colorful, with the text in black print and the photograph captions in blue print. The text is clear, sharp, and easy to read. The black and white images are excellent with a contrast between “dark and light” that makes the detail captured by the image stand out. The color images are quite stunning, are sharp and clear, and of high quality. There are a number of pages featuring 3-View profile illustrations. These illustrations will prove invaluable information to modelers, showing wing-walks, colors, locations of separation lines between colors on the wings and fuselage. Combined with tables of data that list the squadron, nickname, tail codes, and miscellaneous notes regarding the F9F, this publication will provide modelers with a treasure chest of information resulting in information that will help make a model authentic and accurate.

This publication is highly recommended for the quality of the photographs and illustrations, the amount of researched content contained in the book, and a reasonable price for the product. Thanks to Detail & Scale for making this publication available to IPMS/USA for review.