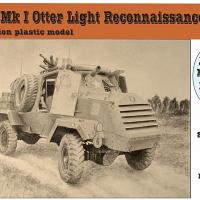 The Otter Light Reconnaissance Car was developed by General Motors Canada to meet the demand for a light armored car. The design followed the layout of the British Humber Mark III LRC. The Otter was based on the Chevrolet C15 Canadian Military Pattern truck chassis and used many standard GM components. The armament consisted of a hull-mounted Boys anti-tank rifle and a Bren light machine gun in a small open-topped turret. Although it used a more powerful engine than the Humber, it was larger and heavier; overall performance was less than the Humber but still acceptable. Between 1942 and 1945, 1761 units were produced in Oshawa, Ontario, although fewer than 1,000 were delivered overseas. The Otter served with Canadian units in the Italian Campaign and Northwest European operations. It was also employed by the British Army and the RAF. Some RAF regiment vehicles used aircraft armament such as 20mm cannon and 0.303 Browning machine guns. After the war, the Otter was used by the Jordanian Army and Dutch Army during the Indonesian Revolution.

The multi-media kit comes in a very sturdy 12x7.5x2 inch glossy top box. My first inspection of the contents revealed six highly detailed sprues, one large photo etch fret, two pocket-sized zip-loc bags filled with resin castings including assorted beading wire, three small decal sheets, and eight pages (4 legal size sheets) of photocopied instructions. The plastic is flawless and features beautiful details. The photo etch is very nice, highly detailed, and made from shinny brass. The highly detailed resin parts are cast in a pale cream color and are very high quality. The only blemishes I found were with the tires – the pour block mangled the tread in that area (not a big deal). Beading wire is also included in three sizes. The kit offers three decal options; each option comes on its own decal sheet. These are nicely printed, colorful, and in perfect register. And lastly, the instructions. This is the kit’s only weak spot. You basically have a confusing spattering of photographic images photo-copied on each page, a few exploded-view line drawings, and you must go online to review your decal marking options. But don’t despair, even I managed to figure them out.

I began the build starting on page one with the frame. After looking at the illustrated parts breakdown, I began removing the parts from their sprues. This is where I first noted an error in the instructions. Parts E11 and E12 are reversed, part E1 is really E3, and B10 is E10. Once that was sorted out, I quickly finished the basic frame construction. I then began the long photo etch trek ahead of me by adding small bits, brackets, bracesm and the transfer-case cross-member. You will need a metric scale ruler to place this piece. Next up, the engine and another illustrated part breakdown showing the 5 main plastic parts. Once completed, this finishes up page one.

Page two. Now the fun begins. On this page, there are 12 photos of assembled subcomponents and part numbers. These include building up the leaf springs and drive axles, then attaching them to the frame. During this part of the build, 0.5mm beading wire is used and very small photo-etch parts embellish the engine, leaf springs, and drive axles. I quickly picked up on the method of the planner’s madness and was soon moving on.

Page three. Several more detailed photographs covered the CV joints, brake drums, and tires. This is where I deviated from the planner’s guide and opted out by not adding the tires at this point in the build.

Pages four and five. You must lay these two pages side by side because the photos were taken at different stages of the build and are not in concert with the true building point, thereby leaving the modeler to his own modeling skills, guesswork, and hopefully a pretty good general knowledge of old trucks. The steering is at the heart of the photos and consumes a fair amount of work. I really liked bending the wire parts despite the fact there were no templates. The engine and cross member installation using photo etch is a bit tricky, and is complicated by guesswork as to where exactly it should go. From that point, I finished up the transfer case and drive train. The drive shafts must be cut to fit. The brake cylinders and linkages, along with other smaller bits, finished out the bottom half of the build. I then shot a primer coat of Mr. Sufacer over the oddly attractive chassis. It was here that I added the tires, using 5-minute epoxy and a simple jig.

Page six, the cabin. On this page, there are very detailed exploded views of the Otter’s plastic parts. However, the rest of the page and pages seven and eight were photos of photo etch parts and the search for Waldo was afoot. This isn’t as easy as one would think, but the results are worth the extra time. The photo etch turret and wire Bren machine gun mount wasn’t as hard as it looks. If you do run into problems, there is an online tutorial. The decals are the last item of the kit and they’re very nice.

I have to say this is a great model kit. I really enjoyed it. It presented a challenge like no other model kit I’ve built before. To be honest, it is really a work of art. My only gripe – the Bren light machine gun is not supplied in the kit. However, it is sold as an addition to the Otter.

Thanks to Stevens International for supplying the kit and IPMS for allowing me to build and review it. I really enjoyed building such an awesome model.

Completed chassis from below

Underside from rear
Previous Next