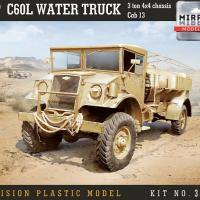 The Canadian Military Pattern (CMP) truck was a class of military truck - of various forms - made in large numbers in Canada during World War II to British Army specifications for use in the armies of the British Commonwealth allies. Standard designs were drawn up just before the beginning of the war.

CMP trucks were also sent to the Soviet Union following the Nazi invasion, as part of Canada's Gift and Mutual Aid program to the Allies. During the War CMP trucks saw service around the world in the North African Campaign, the Allied invasion of Sicily, the Italian Campaign, the Soviet Front, the Burma Campaign, the Battle of the Philippines (1941–42), the liberation of Northwest Europe, and the Western Allied invasion of Germany. CMP trucks also saw service in post-war conflicts in Indonesia, French Indochina, and the Portuguese colonies in Africa.

The kit is produced by Mirror Models, maker of scale model kits. The kit arrives in a very colorful box with artwork of a CMP Water Truck in dessert camouflage somewhere in the African Dessert. There are also some test shot photos displayed on the side of the box showing detail of the truck.

The kit consists of approximately 400+ parts and comes on twelve grey sprues, one clear sprue, one PE sheet, and includes resin tires. The parts are nicely molded, with no flash, fine panel lines, and small sprue gates. The 16 page instruction sheets show the suggested assembly through 34 multipart steps starting with the engine assembly, chassis assembly and progressing through cab, pump and pump housing, tank, and final assembly. The decals were printed with in registry with no silvering.

The kit fits together very nicely, but one has to take care when assembling. It is definitely an Intermediate Modeler Kit. I had to follow the instructions very closely when assembling any of the subassemblies. The are some assemblies were the placement of the parts are rather vague or incorrect. Check your reference materials for assistance. The PE sheet provides many of the parts used through out the kit. Just realize that there is no equivalent molded plastic part so if you mangle the PE part there is no backup. By far the most difficult subassembly to make is the Frame. All the parts are separate so care must be taken when lining up the frame rails and cross members. There are fine locator holes to help you align the cross members to the rails, but it is really easy to get out of alignment. I made a frame jig to keep the parts aligned while the glue dried. The cross members must be placed at the exact distances, or the motor and transmission will not line up. To finish off the frame, there are many PE gussets and stiffeners to provide detail. The second most difficult assembly is the cab. Alignment is key so that all the cab pieces fit properly including the doors. If the cab is out of alignment the doors will not fit. The floor of the cab is one entire PE piece of diamond plate. When placing the cab on the frame there is just one reference drawing but no positive locator points. I built the cab, and water tank subassemblies at the same time. I test fitted each on the frame at the same time along with the rear fenders so that I could mark the frame with location markings ensuring each was placed correctly. The other difficult assemblies to make are the tank pumps XX, YY and ZZ. The remaining assemblies are not difficult to make and the PE detail parts look great. The engine is nicely detailed and is suitable for display. Decals are provided for the cab instrumentation. The front wheels can be posed in any direction, which adds realism to the kit. There is PVC hose provided with the kit to plump the pumps to the tank and control handles.

I painted the overall truck using Tamiya colors. The makers provide a very helpful painting and marking guide in color for the two options referencing Mig paints. I painted the truck as the Canadian vehicle in olive drab.

The decal sheet is very basic with only two decal options. A British truck from an unknown unit in North Africa 1942, or a Canadian vehicle in Belgium 1944. Refer to the painting and marking guide. The decals laid down very nicely even over a flat sheen surface.

Overall the kit is a joy to build and builds into a nice CMP Truck truck. The fine panel lines and the detail are exceptional for a kit of this scale. This kit would make a nice diorama piece.

My thanks to Mirror Models and IPMS USA for the opportunity to build this kit. I look forward to building more of the new Mirror Models kits in the future.

Close-up of cab and front-right side of vehicle

Left side view of truck

Close-up of top of cab