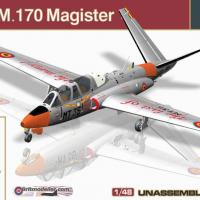 When you open the Box you find all the sprues nicely individually bagged in resealing bags. Over to the side there is a cardboard cutout that holds a very nice plastic case containing all of the white metal parts. These parts consist of replacement main wing spar, tail spar, landing gear, guns, ammo belts, and a couple other replacement bits. Also included are nose weights. With the sprues they have included a full clear sprue which is just the same as Sprue A so you can do a Skeleton view of the fuselage. Under all of the sprues you find a small fret of Photo Etch for seat belts, air brakes, and landing gear door latches and a very large decal sheet that gives you the option for 5 different markings options:

I started construction with the cockpit and right away the fit was amazing. The seats are 5 pieces which consist of 2 side walls, a bucket and separate cushions for both back and seat which I think is great because it allows you to paint them separately and apply them later. Everything else fit in quite nicely and with no fuss. Once the cockpit was together, I inserted the cockpit tub assembly into the fuselage half which went in snug, and almost seemed like a snap. But it was lined up perfectly and no need for taking it out and making corrections. I then assembled some of the interior ribbed pieces that would be seen if you use the clear fuselage. You do not have to do this if you are not using the clear fuselage, and the instructions clearly mark this out which is nice. The fit was great with little to no seam. I would almost compare it to the fit of a Tamiya kit. I used the metal spar in my construction for added weight and strength, but you do not need to use these metal parts at all, as the kit includes all the parts in plastic as well. I then added the tail spar, and glued the halves together, with the cockpit tub fitting just as snug on the other side, and once again getting excellent fit almost like a Tamiya kit. After the halves were together I moved to the engines. There are a lot of small parts in these, so I recommend you have tweezers when assembling. The engines are built up in 2 sub-assemblies consisting of the compressor and exhaust section, and the front fan area. There is no detail for the fan, which is alright though, because you wouldn’t see it anyway even with the clear version. In the end it builds up to a very detailed engine, and still gives plenty of room for someone who wants to do some hosing. The engines just get inserted straight into the fuselage from the rear. The fit here isn't the greatest. It has a specific way its supposed to go in, but there are not clear markings on which way that is, so you have to turn it around until it slots in. Once the engines are in, you can install the exhaust baffles, which come in both metal or plastic. (I chose the metal ones)

I next moved onto the wings. First I assembled the landing gear bay, which consists of 3 side walls that get installed into the upper wing section. The fit here was very good, and I would almost say it wouldnt need any glue. Once the sidewalls are in you can just close the wing halves, which once again have an amazing fit with little to no seam. The flaps come separately, so you can have them up or down. I applied an aftermarket set of flaps in the up position, which were very nice as they slot right in with no fuss. For the spoilers you have the option to have them up or down. These are Photo Etch and assemble very easily. You then can build up the wing-tip fuel tanks, which you have 2 options for, and then you can attach them which go on with no fuss with great fit. Once both wings are assembled, you can attach them to the fuselage. These just slide onto the spar and mount straight to the fuselage, and if you squeeze them on tight enough, you will have a very small seam that can be easily worked out with some Mr. Surfacer. I decided to leave these unglued for easy transport even though it fits in its own box fully built. The aft stabilizers consist of 3 parts: two halves for the main body, and the control surface. This went to together simply and with no fuss.

One small subassembly that i found very nice was the nose gear/gun bay area. It consists of multiple plastic parts that can be swapped for the metal parts, which is what I chose to do to add more weight to the nose. The only plastic in this section is the fuselage, and the gear door. I had some slight issues with getting the nose gear installed, because the location you’re supposed to attach the gear, and the position the gear are supposed to be in, doesn’t work together. On top of the gear support you install the gun trays and the guns if you're doing a trainer version. I chose the Patrouille De France version, which has no guns and a different nose cowling. Once this subassembly is finished, it goes straight to the main fuselage with no fuss.

Finally the main gear was simple and easy. They easily went into the gear bay, and the tires went on nicely.

As I mentioned before, I decided to paint mine as the Petrouille De France version, as I really liked the very colorful scheme. I used Model Masters Acrylic paints, starting with white, then moving to Guards Red, and then finishing with French Blue. I cleared the model with acrylic Micro Gloss. The decals went on very nicely, weren't too thick, and weren't too thin. The white lines on the wings and the fuselage are all decals. But I put on the speed brakes before putting the decals on, so I had to mask and paint the white on the wings. But the white decals for the fuselage and the tip tanks went on great with no color bleeding through. I used Solvaset to set the decals into the all the panel lines, which worked out good, and the decals didn’t react badly to the solvaset.

I feel this is a great kit, and you definitely get what you pay for - with all of the Photo Etch, the White Metal parts, and the huge decal sheet, it's worth it. I believe AMK should release a cheaper version that doesn't include the metal parts, as they also include all of those parts in plastic on the sprues. I would like to thank IPMS and AMK for allowing me the chance to build a review this kit. I will definitely have to get another, so I can do some of the other color schemes, as they are all so good and it is hard to decide between them.

Clear sprue for canopy and lenses for assorted lights

Assembled and painted aircraft - left, above

Assembled and painted aircraft - left-front, above

Assembled and painted aircraft - left-rear, above

Assembled and painted aircraft - right-rear, above

Assembled and painted aircraft - rigth-front, above

Close-up of empenage, showing the amount of included surface detail
Previous Next