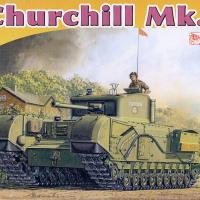 FINALLY, a new, state of the art 1/72 Churchill!! The Churchill was the second most produced British tank ever, following the Valentine. This Mk. IV was the most produced version. Designated the A22 Infantry Tank, Vauxhall began delivery to units in June, 1941, after an extraordinarily short development. It served in Dieppe and Tunisia, and then virtually all European theatres of WWII including Russia, and post-war soldiered on in Korea and later with several countries. I believe Airfix had the first small scale Churchill kit in 1/76, released in the early 1960s. ESCI (later Italeri) released a 1/72 Mk. III, with latter releases having link and length tracks (the others mentioned here have single length vinyl tracks of varying quality). Hasegawa released a Mk. I in 1/72. Matchbox released a 1/76 AVRE complete with SBG Assault Bridge. Cromwell has several resin 1/76 Churchill versions. If I missed any, I’m sure they are as dated as these are.

First, the nicely illustrated sturdy box shows you a fair painting guide, pointing out that the square block on the inside of the front sponsons is a block of wood, like some German tanks had, for use with a jack for repairs. Note that, from D-Day on, most British tanks and vehicles were painted in a UK version of OD. I used Testor Model Master enamel Field Drab #30118. The illustration shows the black rubber trim at the bottom front of the fenders and, if you’re not familiar with the Churchill, it correctly shows the tent-shaped louvers over the air intakes (this was to prevent dirt and debris from falling into the air intakes). The louvers make it difficult to see the superbly rendered grill intake tops, though it’s surprising that they weren’t provided as photo etch parts. These covers were often lost or removed in service.

The box top art shows black rubber tires on the bogie wheels, which is wrong. They were metal, painted the same color as the tank. The back of the 12” x 20” instruction sheet shows them correctly. During trials, rubber tired bogie wheels of different specifications were tested under the codename Pussyfoot. The disadvantages outweighed the advantages, so production Churchills had metal wheels. If you don’t have good references or have never seen a real Churchill, note that the outer edge of the wheels do not sit on the tracks. The inner wheel is recessed and this sits on the raised mid section of the track.

Dragon’s instructions show gluing on all the small parts before adding the turret to the hull. Murphy’s Law states that small parts will disappear during construction, so break the law and hold off the small parts until last. The 65 gray injection slide molded parts come sealed in separate poly bags to avoid parts scratching each other, breakage, or loss of parts if they came loose from the sprues. The hull bottom is one piece, with see-thru vents and what looks like serious attention to detailing the bottom with every rivet and hatch (no, I didn’t count them!). The hull top piece is precisely molded, with a separate part for the rear engine deck. The fender edges are very thin. The extruding exhaust pipes come as a separate part but the ends are not drilled/slide molded open, so I opened them. The minute tools are molded on. Dragon molded the tools to scale. If they were separate parts, very few of us would see, much less be able to handle, them. Separate pairs of “flimsy” 1 gallon PoW (Petrol or Water) cans are provided to fit into the rear fender racks. A spare track link is provided for the outside rear sponsons. Dragon doesn’t identify it, but part C11 is a box that contained a first aid kit and telephone for infantry.

Unfortunately the driver and gunner’s hatches are molded closed, as are the square side hatches. The armored periscopes are provided. When you assemble the turret top and bottom parts together, you might feel it is a poor fit. The turret rear will mostly be hidden by the storage basket. Photos show a seam around the bottom of the real Mk IV turret, as well as a rough texture. The kit turret has fine molded-on texture. I stippled my turret with an old, stiff paintbrush and Tamiya liquid cement – problem solved. Both turret position hatches can be assembled open or buttoned down. Each hatch has its leather pad molded onto the inside. The 6-pounder cannon barrel muzzle is slide-drilled out but not the tiny Besa machine gun barrels, which would be impossible to open up. The entire Besa MGs are provided, not just the barrels. It’s a shame you can’t see them when the model is finished. The turret includes the storage basket. Two tiny fire extinguisher bottles are provided (these could be painted brass or overpainted the tank color). Most amazing to me is that DML managed to mold the odd shaped (round/triangular) turret antennae base as one plastic piece. Awesome! Ditto with the Commander’s thin sighting vane. Well done! The box top doesn’t show it, but an antenna should stand up from that antenna base. That’s easy enough to do with sprue or thin piano wire.

The running gear bogies are molded as two long runs for each side: a front and back with all the wheels and springs molded in place. This simplifies construction while capturing important details. When assembling, note that the legs that hold the running wheels should angle forward and, when you’ve properly assembled the sponsons, you should be able to see the coil springs readily. All of the front idler sprockets wheels have their lightening holes opened up (I believe the part numbers on the instructions are not clear). You won’t see any of the sprocket wheels if you use the front and rear mud fenders. When properly fitted, the mud fenders will angle upwards. The outside faces of the sponsons are sharply detailed but not the towing cables, which are molded in place. The square escape doors are molded closed. The tan single-length DS tracks are beautifully molded on both sides, glue together, and paint adheres to them. You won’t see the top half of the track unless you remove some upper track guards. If you close up the sponsons as provided, you may as well cut off some of the track that won’t be seen and, using photos as guides, ‘weld’ sections of them as add on armor just as was done in WWII. A lot of photos show the front and/or rear mud guards, and sections of the upper track guards removed. The track guards nearest the turret were removed to avoid jamming the turret traverse.

Decals are provided for one Churchill from C Squadron, North Irish Horse at the Hitler and Gothic Lines in Italy 1944. Mr. Churchill’s Tank page 162 has a black and white photo of CASTLEROBIN IV identified as Mk IV. The Churchill Tank, by Bryan Perrett, features this tank, identified as a Mk. VI, as a color illustration. It explains that the C Company circle should be red but the photo they had suggested it was in blue. Dragon provides decals for both, so you decide! CASTLEROBIN IV had some prominent stenciling that would have made the model stand out, but Dragon chose to depict it with the stenciling either worn off or covered in dirt. The illustration shows their use of stowage, including a large tarp where the external fuel tank would have been. Mr. Churchill’s Tank photos shows this vehicle well worn in service with “…damaged remains of the track guards…” and missing an air intake louver cover and the turret fire extinguisher and cylinder flag container. The illustration and photo show a long ammo box welded on the back of the turret storage basket.

Dragon provides a third serial number and C Co. insignia decals but doesn’t indicate where to place them. I put the extra serial number on the lower front glacis plate. The C Co. insignia went on back of the storage box on the turret. You could leave them off if you choose. The decals went on without difficulty. First I coated the area with Future Floor Wax and then, when dry, I applied the decal with wet Future and, once settled in position, I gave a final coat of Future over the decal. The clear decal film disappeared entirely without having to trim it away.

I highly recommend this as the best 1/72 Churchill model available today! It was engineered to be a pleasure to build. My suggestions would make it “more perfect,” especially providing the option to pose all hatches open or closed and providing the tow cables as separate parts. Some minimal interior that might be seen thru an open hatch (i.e. driver’s seat, instrument panel, controls, breech…), decals for additional vehicles, crew member(s) and crew stowage would be a giant leap forward! As it is, you will have to raid your spares box for British tank crewmen. Roco made them in 1/87, Milicast of Scotland has some 1/76 figures in resin. AB Figures in the UK has some white metal crewmen. Recently HaT from Bellevue, Washington, USA, released a 1/72 set of WWII British Tank Riders which includes Tank Crew. I finished my Churchill with the two HaT crewmen. I believe modelers would appreciate a brief history of the vehicle that would explain why you have a choice of a blue or red C Co. insignia, much less interesting facts about Churchills. I hope to see Dragon continue to release more and more long-neglected Allied WWII tanks and soft skins, all slide molded! Thanks to DML/Dragon for the sample and to IPMS/USA for the opportunity to review it.

Dragon is following up with two Mk. IIIs and one would hope many different Churchill variants, as they did with the Sherman. In fact, pretty much all of the 1/72 major English tanks and AFVs have either never been done in injection molded plastic, or exist in a poor state of art that would truly benefit from Dragon’s superb quality. Imagine, all new, state of the art “Braille Scale” (1/72) Honeys, Lees and Grants, Valentines, Matildas, Humbers and Dingos, A-13s, Crusaders, Achilles, Comets, Challengers, Archers, Bishops, and more…

Right side with crew