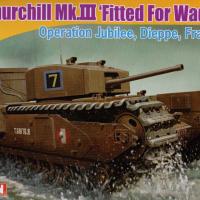 Conceived and initially developed on the eve of World War II, the Churchill infantry tank was designed to provide infantry support in European conflicts, including trench warfare as seen in World War I. Although rushed into production early in the war to counter an anticipated German invasion of England, the Churchill matured through a number of marks to become a versatile and effective element of Allied armored forces.

Some Mk III Churchills were fitted with special wading gear for amphibious landings. Most notable of such landings was the ill-fated Operation Jubilee, in which Canadian forces tested the feasibility of opposed amphibious landings on the European mainland in 1942.

This variant of Dragon’s Mk III Churchill features additional parts to outfit the kit with wading trunks, exhausts, braces, and other details to replicate the Churchills landed during Operation Jubilee.

The kit is molded in light gray and features crisp raised and recessed detail. Tracks are single-piece molded DS. Turret hatches can be displayed in open or closed positions. Decals are included for 3 tanks from 'B' Squadron, 14th Canadian Armored Regiment (Calgary Regiment), 1st Canadian Army Brigade, during Operation Jubilee.

This review build was undertaken by 9-year old Camden, a veteran of many IPMS/USA reviews, under the supervision of this author. At the time of the undertaking and given the contents of the kit, it seemed like a suitable endeavor for this accomplished junior modeler.

Wading into the build, Camden quickly tackled turret and lower hull assembly. Careful dry-fitting was essential in understanding proper orientation and alignment of the lower hull and running gear. A couple of the small turret periscopes escaped the tweezers and were devoured by the “carpet monster.” Replacements were fashioned from styrene rod and strip stock. Significant trimming was needed to get part A11 to properly fit behind the glacis plate and between the hull sides.

Fit of the breathing trunk halves was a bit rough and required a bit of scraping, sanding, and putty. Extra attention was also required to ensure proper vertical alignment of the 3 to ensure that the rigging straps align and attach properly in the final assembly step. Camden had to leave the aft 2 straps off due to unrecoverable misalignment of the rear wading trunk, which had passed parental inspection.

Tracks were left off and painted separately from the tank. Ammo from Mig British SCC-1A Brown was used as the primary color for the hull and turret, and Tamiya Metallic Gray was used on the tracks. Minwax Acylic Gloss was used to provide a gloss surface for the decals.

Decals, although few, posed their own unique challenge. Decal thickness, small size, and the raised tow cable detail made it very difficult to align and conform the side armor flag and ID number decals to the surface. Once applied and settled as best he could apply them, Camden then added the tracks and sealed the decals and dulled the finish with Model Master Acryl Flat supplemented with a couple drops of the SCC-1A Brown to tone down the decals.

Although consisting of a small parts count and some simplified assembly features, this Churchill Mk III variant proved to be challenging not only to a moderately experienced junior modeler, but also to his very experienced coach. For that reason, we only recommend this kit for advanced skill level modelers and intermediate skilled modelers looking for a bit of a “stretch” in small scale armor.

Thanks to Dragon USA for the sample kit and to IPMS/USA for the opportunity to provide this review.