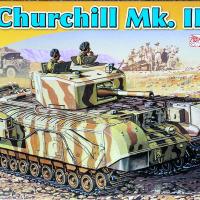 The Churchill tank had one of the largest production runs of any British WWII tank and was built in more variants than any vehicle except perhaps the Sherman. However, until very recently, it has been woefully under-serviced by the modeling manufacturers. The first kit was the old Airfix one from the 50's, which had many limitations. Then came the Aurora 1/48 one in the 60's which was almost toy-like. In the 70's came the 1/72/76 scale kits; the Hasagawa Mk I/II, ESCI Mk. III, Matchbox Mk IV bridge layer, and finally the 1/35 Tamiya Mk VII Crocodile. Since then, nothing has been released. However, Dragon has now released several small-scale models of this historic vehicle. The subject of this review is their kit of the Mk III version with the welded turret and 6 pdr. main gun.

First glance reveals three sprues of crisply molded parts, the hull top and one-piece lower hull, and one tree of what they call DS type plastic tracks. This material responds to traditional styrene glues, but whether you actually glue them or not will be your choice, as we will discuss later. The turret is in three parts: the top, all the sides molded as one piece, and a floor. This is a step up from other Churchill kits which have either split the turret in half lengthwise, or top/bottom, or at least had a separate front plate, all of which led to seams to be filled. The turret roof is nicely detailed and drops into the top of the turret side parts nicely. Mine needed a tiny bit of putty to seal up some small gaps around it, but others wouldn't notice.

There have been several schools of thought on how to approach molding the track sponsons and suspension units in Churchill kits. Dragon has all those tiny road wheels molded onto two pieces for each side, with springs and suspension arms included. This unit is added to the bottom of the sponson, and then the exterior sponson wall added on. This makes for a total of three parts. In the Airfix kit, each wheel and suspension arm is separate, making for a suspension unit with 35 parts, and there are two of them, one for each side! This one goes together quite easily. However, the sprue attachment points on the suspension parts are a bit heavy and, due to the delicate nature of these parts, care must be taken in their removal.

Now we get to a pet peeve of mine, separate detail parts. For years, the technology did not allow for small parts such as sights, antennae mounts, tools, and tow cables to be molded separately to any great extent. Dragon demonstrates in this kit that this is no longer the case. The intricate commander's vane sight and the delicate #19 set antennae mount are very nice additions. However, they can do that kind of delicate detail molding, yet they molded the tow cables onto the sponson sides and the tools into the engine deck. The tow cables were missing as often as present in reality. I don't understand this. The tools on the rear deck are touted on the box as "delicately molded". I've included photos of all the other small scale injection Churchill engine decks to illustrate that the Dragon tools don't look all that much better. On top of this, they molded the muffler and its armored cover into the engine deck as well. No one else has ever done this and it just doesn't look as good.

Now as to those tracks. Due to the nature of the Churchill, if you are going to connect the track ends, you have to do it before you button up those sponsons, which means painting the tracks before assembly and then being awfully careful to not get paint on them later when you finish the rest of the vehicle, or paint them later and be careful not to get paint on the rest of the finished tank. My solution is to leave them off, paint them separately, and as a last step just shove the ends over the drive and idler sprockets and let friction hold them in place. You'll have to shorten them, but it doesn't matter because past the two ends of the tank, you can't see the tracks anyway. In addition, there are many heavy attachment points where the tracks join the sprue. Due to the soft nature of this plastic, these are difficult to trim off correctly.

All in all, this is a nice, but not great, kit of a Churchill Mk III. It is crisply molded with practically no flash or mold seams and it does have some nice detail parts, but cuts the same old corners as its predecessors on other ones. It's not exactly a quantum leap above the old ESCI kit, which was the best small scale one for years, but it is better. Whether it's worth the price point better, I'll leave to you.

I’d like to thank Dragon Models USA for supplying the review kit, and IPMS/USA for allowing me to review it.