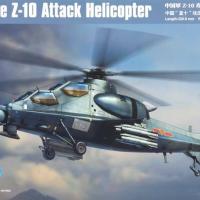 The Z-10 is a Chinese attack helicopter whose mission is anti-armor and battlefield interdiction. Its development began in the 1990’s and its maiden flight was in 2003. China had seen a need for a dedicated attack helicopter because in the past it had only used up-armored transport helicopters and required a more specifically armed and mission-oriented helicopter in the future.

The Z-10 has a standard gunship configuration, with a narrow fuselage and stepped tandem cockpit, the gunner in the front and pilot in the back. The Z-10 has sloped sides to reduce radar cross section, and armored plates to protect all vital systems. The prototype was powered by two Canadian Pratt and Whitney PT6C-67C turboshaft engines. At first glance, it looks a lot like an Apache attack helicopter.

The kit comes with 152 parts on 7 sprues, all molded in grey plastic. The clear pieces come protected in small pieces of foam, and the bubble areas on the cockpit look really well done. All sprues are in separate bags. The parts are crisp, clean, and very well detailed. The fit of the pieces is amazing. While I was test-fitting part #20 (engine housing cover), I had to get a pair of tweezers to remove it so I could add glue, it was that pricise. I was a bit concerned about step 2, where you put the two hull halves together, because there are three assemblies that need to go inside before gluing them together (cockpit, rotor, and nose gun). I was pleased to see that the cockpit snuggled in really well, and the hull halves went together perfectly. The engineering of this kit is great. I did need to use just a very small bit of putty that really probably wasn’t needed and was just something I wanted to do. There are some different options for missile loads using the TY-90 and HJ-10 missiles on rails, or two different rocket pods. I went to the internet to see how these were mounted and in what configurations, mostly out of curiosity, because the instructions do show where they go. I used the rocket pods because I liked them better and it just seemed that there were fewer examples of it being armed this way.

The instructions are 8 pages (7 ½” x 10 ½”) with 10 steps. They were clear and the drawings were easy to understand. The instructions have call outs for Mr. Hobby colors, but on the color sheet they have the comparable colors for Vallejo, Model Master, Tamiya, and Humbrol. They pretty much give you the main areas for color, but it would be nice to see a little more detail in this area. The full color paint and marking sheet is really nice to have, so I give them a big plus on this. This version of the Z-10 is for a prototype and has decals for one unit, which is in all-black. I used Floquil Grimy Black, and for the rocket pods I used Vallejo USA olive drab. The decals were very well done, only taking 10 to 15 seconds for them to come loose from the paper. They also responded well to Microset and Microsol liquid.

Recommended, I’m really impressed with the amount of detail and the fit of the kit parts. I will definitely be building more Hobby Boss kits in the future. When I looked up their website, I noticed that they have a pretty extensive amount of helicopters in their inventory.

Thanks, to Hobby Boss and Squadron for providing an interesting model, and thanks to IPMS/USA and Steve Collins for allowing me to build it.

With ordnance
Previous Next