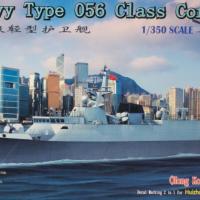 The 056 Class patrol ship replaces the older 037 Class and was first suggested in the 1980’s but did not emerge until 2012. The ship is a thoroughly modern design with a modular hull featuring stealth properties. It weighs 1,400 tons fully loaded and has a length of 89 meters and a beam of 11.6 meters. Power is provided by 2 marine diesel engines giving a maximum speed of 28 knots and a range of 6500 kilometers. A mixed armament is carried consisting of a 76mm gun, 4 x YJ-83 anti-ship missiles, 10 x HQ-10 SAM missiles and 6 torpedo tubes. The rear deck has a helipad to operate small to medium size helicopters. A total of 20 ships have been ordered for the PLAN, and the type has been offered for export with a different hull and armament options.

The kit is produced by Bronco Models, a well-known company who is known for producing quality model kits. The box art work in outstanding and shows the Type 056 Class Corvette sailing through Hong Kong harbor with the modern city in the background. The kit can be built for either hull 596 (Huizhou) or 597 (Qinzhou).

The kit consists of 174 parts and comes on three gray sprues, two clear sprues for the helicopter, a stand, mid-deck as one piece, one photo etch sheet, and one sheet of decals. The parts are nicely molded with no flash what so ever. All panel lines are engraved and all the sprues have small gates. The 10 page instruction sheet shows the suggested assembly through 14 steps starting with the 2 piece hull being assembled, and progressing through the superstructure assembly to the final installation of the photo etch railings. The construction process is the same for all two options.

This kit is a high quality CAD/CAM designed kit so the fit is outstanding! The two-piece hull fits together with no filler required. There is a lower deck designed into the hulls, which adds some rigidity to the structure and aids when fitting the two hull halves together. When gluing the bow gun deck to the hull there is no gap at all, it just slides right in. I had no problems with gluing together any of the remaining assemblies and did not have to use any filler at all. But there are many small highly detailed deck, antenna, gun, and radar parts which require the use of tweezers and a large magnifying glass when installing them on the model. The tiny parts are very detailed and fit exactly.

There is a sheet of photo etch provided for the vents on the exhaust stack and the hull, along with the ships railings. The PE for the vents fit exactly and was installed easily. The PE for the railings has to be bent into the correct shape, but there are indications on the PE where to bend. You just need to test fit it to get the proper angle. The only deficiency I had was with the PE railings around the helipad (this modeler’s error!). I butted the railings “end to end” on both the port and starboard sides and ended up with a 4 millimeter gap at the stern on both sides. The instructions show a slight gap in between each railing section and this probably would have resulted in no gap at the stern. But each section of railing would have been very fragile. In the end I just purchased a generic 1/350 scale railing set and finished the railings around the helipad. There is a helicopter provided for the helipad. It comes on two sprues and is modeled in clear plastic.

I painted the overall ship with Tamiya Royal Light Gray TS-81 (since no color call out was specified) and the deck with Tamiya XF-24 Dark Gray. Then masked and painted the underside of the hull with Tamiya TS-33 Dull Red. The funnel was painted Tamiya Flat Black, and the helicopter was painted a dark green with flat black blades.

Overall the kit is a joy to build and builds into a handsome Corvette! The fit and detail is outstanding with no filler required.

My thanks to Dragon Models, Bronco Models, and IPMS USA for the opportunity to build this great kit. I look forward to building more Bronco kits in the future.