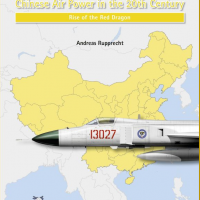 Military aviation enthusiasts have known that China has been modernizing and expanding its air force at breakneck speed over the past twenty years. This book, released to coincide with the 70th anniversary of the People’s Liberation Army Air Force in November of 2019, talks about the history and development of this much storied organization.

The book is organized into seven chapters:

As such, you are actually getting three books – one of the history of the founding of the PLAAF from chapters 1 to 3, and then one of the development of the PLAAF from chapters 4 to 6, and finally, a book about the organization of the PLAAF in the appendices. Most interesting is chapter 5, as it lists aircraft projects, including a brief discussion of some of its more ambitious projects, many if which were unfortunately sidelined as a result of the Cultural Revolution.

Altogether, these chapters provide an overview of how political events, political climate and even the Chinese experience throughout the last 100 years have shaped how the PLAAF made decisions that affected the design or acquisitions, resulting in what today is one of the world’s most formidable air forces. Essentially, this is more of a history book rather than a walkaround or profile, like many of Mr Rupprecht’s books it does not have many modeling applications but would give the reader a good sense of the history of the PLAAF and inform and inspire the modeler’s decision-making process when it comes to selecting his or her next PLAAF project.

Like any Harpia book, all photographs and illustrations are clear and in color in beautiful, heavyweight glossy paper. There are occasional editorial mistakes but none that would cause the book to become unintelligible. Mr Ruppercht has compiled yet another detailed and exciting look into the world’s fastest-growing air force – whether or not this air force can match up with other nations is not discussed, but one cannot be anything but impressed with the rate and speed the PLAAF has been able to modernize, especially in the last twenty years. For the modeler, this means plenty of new and unique subjects!

I would like to thank Casemate Publishing for the opportunity to review this excellent book.

Thanks to what David Knights refers to as The Golden Age of Modeling, you can model just about any aircraft in the PLAAF, though there is no one scale that has everything. Trumpeter and Hobbyboss are your best bet in any scale to build your own miniature modern PLAAF, with Dreammodel, Kinetic, Bronco and Great Wall Hobby filling in some of gaps Trumpeter and Hobbyboss missed.

If you’d like to see PLAAF aircraft up close and personal, the best place to see them are at the China Aviation Museum and the Beijing Air and Space Museum. I’ve been to the China Aviation Museum, which is built on the site of a decommissioned airfield that has its hangars built into the side of a hill. There, you’ll see just about everything the PLAAF has fielded, except for its new stealth aircraft. There’s also an “air parade” display there made out of hundreds of 1/72 scale models that’s quite impressive.

And finally, Andreas Ruppercht has quite a lot of access to Chinese aviation sources, and you can find out the latest and greatest on Chinese aviation from his twitter feed: @Rupprecht_A. He is also a contributor to the Modern Chinese Warplanes group on Facebook, which is run by Harpia, this book’s publisher.